I might not be stalking you, but I am in my backyard taking pictures of my dog’s poop.

Yes, you read that right. 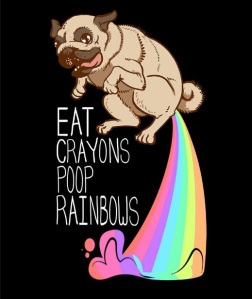 I recently went to the county fair where I was reminded what a tragedy it was that I was never involved in 4-H. I didn’t know much about it at all when I would have been of an age to actually participate. I think my mom told me it was just for kids who lived in the country and had a barn to raise pigs and chickens. I should have pushed harder, especially since I was living in the country with a barn at the time.

It wasn’t until I was older that I realized it involved crafts. CRAFTS! I LOVE CRAFTS! I could have rocked crafts!

Then when I was at the fair this year, I realized their are TONS of categories:

There was just building after building of it! All these projects from wonderful creative minds!

And then there were some that you could tell had just Googled “easy cupcakes” and found how to put a half a Twinkie on top of a cupcake to make a minion. There were several on the table.

Or the ones who Googled “melted crayon collage”. There were even more of those.

So, when our Pointer recently ate around 30 of M’s crayons, I still had these 4-H ideas bouncing around inside my skull. I am on poop duty at my house because, well, it would not get done otherwise. As any good dog owner does, I look at my dog’s poop to make sure it looks healthy.

No, not with a microscope or anything!

Just a quick glance when it is on the end of the scoop shovel is plenty. I have two dogs. I can tell their poop apart by consistency and drop pattern. The Pointer has solid poop and walks around as he does his business, making it a pain to pick up. The Lab/Chow mix…Let’s just say she picks up her own.

I have seen some pretty crazy stuff in my Pointer’s poop. Once there was a plastic eye from a dog toy staring back at me. Once there was an Old Navy cloth tag, just sticking out of his poop (from yet another dog toy, I assume).  There was Styrofoam as well.

When the crayons started coming out, I had a brilliant idea! I took pictures of his poop! In all the colors of the rainbow! 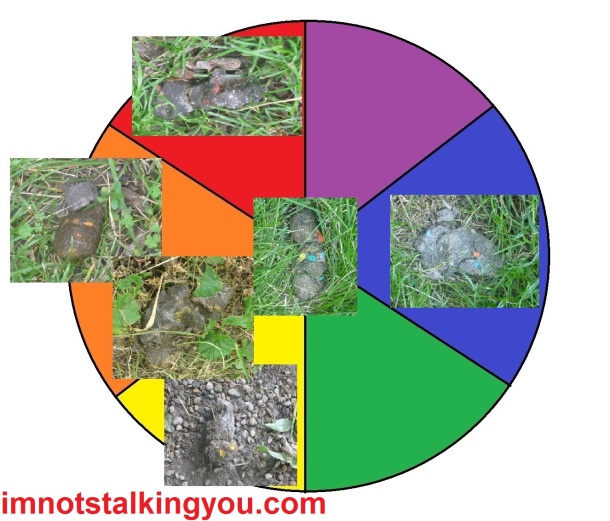 It is my 38 year old 4-H project. Think of it as a cross between raising an animal and a melted crayon mosaic. Except these have been chewed rather than melted.

I could call it:

TASTE THE RAINBOW:
How a Dog’s Digestive System Processes Crayons
*A Photo Mosiac*

Do you think the Skittles people will mind?

This week I learned that:

1.  Green Skittles are now green apple flavored, rather than lime.  Both are gross.

2.  It is supremely rude to type a phone number into your phone as I am on the phone giving it to you. IT IS LOUD on my end!

3.  I think I might need to eat a Mrs. Field’s cookie every day for my entire life.

5.  Back to the Future is very unrealistic. There is no way they could know exactly what millisecond that lightning would strike.*

6.  That my dog may be more closely related to dingos than I at first thought.  See for yourself.

Dingos at the Toledo Zoo

*  The time travel, flux capicitor, and the DeLorean becoming one of the most iconic movie cars of the decade are totally possible and believable.

Posted in What I Learned This Week and tagged Back to the Future, Dave, DeLorean, dingo, Egg McMuffins, green, McDonald's, Mrs. Field's, Skittles, Toledo Zoo. Bookmark the permalink.
%d bloggers like this: