Alternative To The Spork

You might remember that a few months ago I wrote a moving blog post about that under appreciated little eating utensil known as the spork.

Well, my son has taken this to a whole new level. 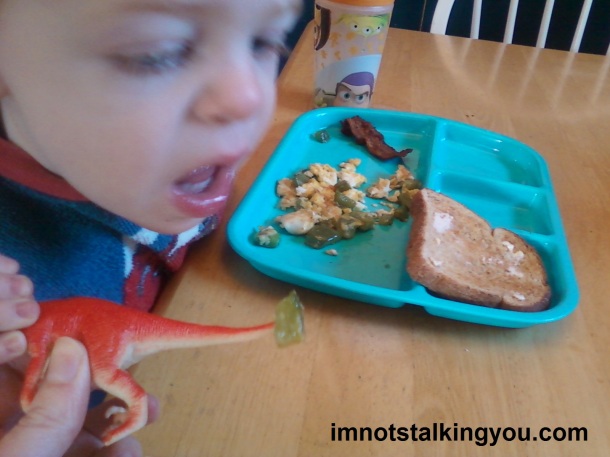 My son, using a dinosaur tail to eat his food. Inventive!

Ya, I know. My kid is an absolute genius!

It is just something my husband started.

He would be looking for me in the house and I would be in the bathroom and he would say through the door,”Are you pooping again? Do you have a poop voucher for that?”

What is a poop voucher? I asked myself and him the same question. It is just some imaginary tool he invented to torture me with. So, then I played the game to try and get back at him.

“Are you pooping? You used up all your poop vouchers for this week (or month, etc.),” I would hassle him.

“I am borrowing from next week,” he would reply, or something equally smart ass.

There is no strict allowance or number of vouchers that you get for a time period. Because poop vouchers are entirely imaginary.

In order to get back at my husband, I spent one night designing an actual poop voucher, according to what it looks like in my head. (My husband fell asleep that night before I got it done to show him.)

The next morning I showed him, and he insisted we make copies. He wanted them big. I wanted them small. I printed off a small batch and a medium batch before we felt like it was a waste of printer ink.

My husband made up some lame, arbitrary rules (he says “overly complicated and unnecessary rules”) for how to use them. Like the big vouchers could only be used Thursday through Monday, except on birthdays, religious holidays, anniversaries, reunions, etc. The little vouchers could only be used Tuesday through Monday 1:15PM EST until 11:31AM PST, with the same exceptions, also excepting February 29th of leap years and the first Thursdays of the month. (No pooping on birthdays? That’s harsh. I guess I know what I will wish for when I blow out the candles.) I laughed til I cried and told him there was no way that I could remember all that.

After my son carried a few vouchers around the house, I realized how very not water-resistant poop vouchers are. Then I laminated them with packing tape. (Yes, I realize at this point I have spent an unusually long amount of time on a product that is just an inside joke between my husband and I. But it makes for a great blog, don’t you think?)

Laminated Poop Vouchers. That is a lot of steaming piles of poo…

There is still no hard and fast number of poop vouchers to be allotted each week. We did agree as long as my son is in diapers, he is off the voucher system. We still have no collection arrangement for them–although I think my son’s shape sorter might handle this job nicely. I asked my husband just today when he came out of the bathroom,”Hey, did you use a poop voucher?” 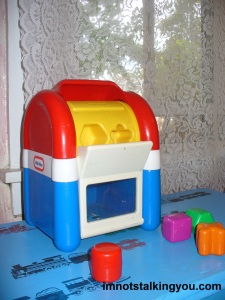 “It’s in the living room,” he replied.

Why has the legend of the poop voucher persisted in our household?

I think it all comes down to the fact that it just sounds funny to say “poop voucher”. Heeheehee.

Growing up, I was the only child of a single parent. I was creative with a very good imagination. So naturally, I always imagined having a large family. The earliest imaginary family I can remember, I had six sisters (Brady Bunch influence?) and one brother named Hellmann (Yup, like the mayonnaise). All the girls lived in the attic together (Boy, would that be totally NOT fun in real life!). Hellmann would come up and run through the room very fast and we would all spin around and our belongings would fly every which way (Yes, just like in a cartoon) and we would all yell “Hellmann!”

There were various other imaginary families after that. But once Punky Brewster debuted on NBC, it was important that I somehow work her into all my imaginary adventures. (In case it isn’t clear, I viewed myself to be Punky:) So, here is the Brewster family I created. There were so many kids with so many names, I had to make a cheat sheet family photo. Then, because I lived to draw, I made many, many family photos. I think part of it may have been to see if I could draw the same people over and over to look the same each time, like Charles Schulz did with his characters. All these pictures have just been sitting in my file cabinet for like 28 years (Yes, I save everything). In the real world, my mom is a hermit and not big on keeping in touch with family. That means, at a point in time, I knew more about these imaginary people than I have ever known about some relatively close member of my own real family.

Family Photo with names and ages.

House Floor Plan. Wow, 4 bathrooms! Must be David & Sheri got married if they started sharing a bedroom!

So, here are some pictures of my fake family. I drew them when I was young. Yes, some of the names are badly misspelled. The fashions are very 80’s. You probably can’t tell from the scan, but from the info on their T-shirts, the family seems to live in Greenville. Greenville: where families have a mom and a dad, older brothers have a nice, pretty girlfriend, younger brothers are always covered in mud, people have look-alike cousins, newborn babies eat cookies, ponytails are sideways, both grandma and grandpa are alive, and houses have four bathrooms. The burning question that remains in my mind, looking back on these pictures so many years later—why the fuck didn’t this family have a dog?!! 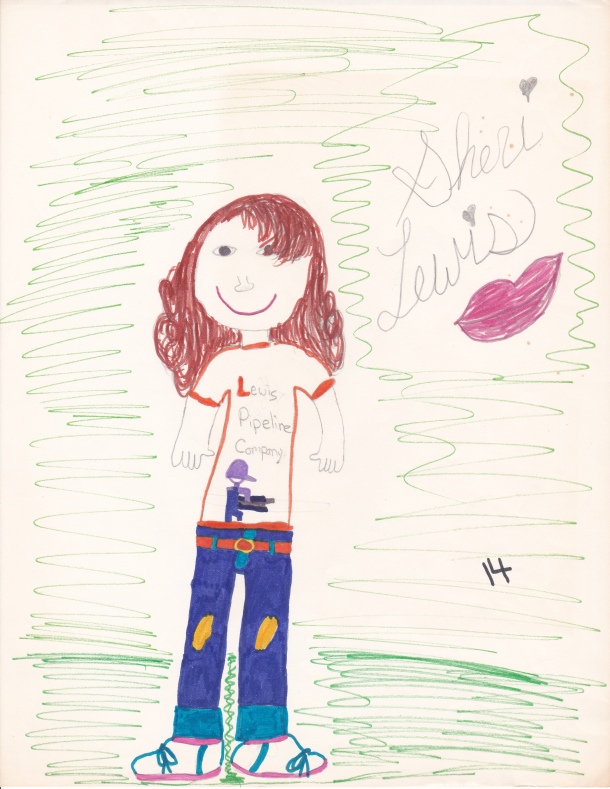 Oldest brother David’s girlfriend Sheri. Notice how she signed AND kissed the picture;)

Newborn picture of youngest sister “Mealisa”. I even did this picture on an index card, so that it would look smaller, like a real picture. Notice she is holding a rattle AND a cookie. 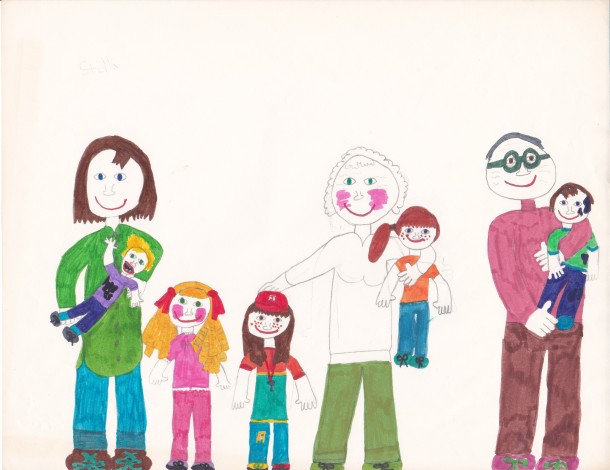 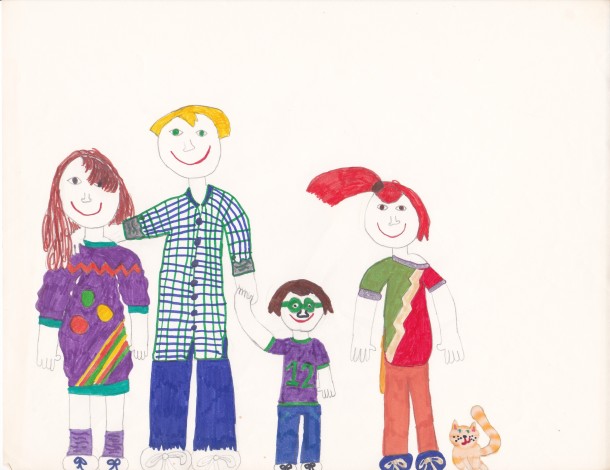 Family at the hospital for birth of Mealisa.

One more. This picture is incomplete, but I felt it necessary to show that imaginary Mom could get dressed up and look damn good:)

I can’t believe I have had my own personal blog for a year now. I dreamed I would have more followers by now, but I have more followers than I really thought I would have. So why hasn’t anyone offered me a million dollars and a book deal yet? Hmmm. Must be the public at large doesn’t find my posts about Punky Brewster, Mom rants, and my dogs interesting enough to follow me. You know what? I am not going to write about better topics, so for all of you who follow this blog, YOU ARE SCREWED!:)

In the last year, I lost my job, job-hunted furiously, supported my husband as he changed careers, and sat with my son through the same major surgery–twice. I feel like 2012 will hold better things for my family this year. I HAVE to tell myself that.

I am glad I have my blog, because I hope that it keeps my writing skills from getting too rusty. On my resume, I do tout my great writing and proof-reading skills. Plus, at my core, I consider myself a creative person. My asbestos friend has found an outlet for her creativity by making clothes for her kids and painting vacation bible school sets. My sister-in-law has found hers by sewing felt toys for craft shows and making Ugly Bird (Oh, I mean Angry Bird) cupcakes for her son’s birthday party. Besides, making a Werecart and Christmas stockings, all I really have is this blog. 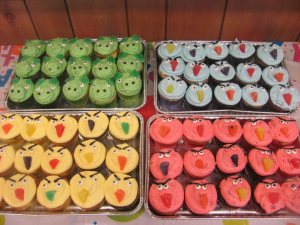 I get more joy out of brainstorming, planning, writing, and publishing this blog than I did from the last three years I was at my job. It makes me feel free, like when I was younger and used to write stories, just because I could. It makes me feel creative, because I can add links, formatting, and pictures to tell my story in the best way. It also makes me feel organized, as I have to pick which posts are timeliest and when they should be posted. I guess that means, in the end, it only matters that I write my blog, and not who may or may not read it.