Utopia Ever After or There I Was, in Six Lanes of Traffic…

This is my post reviewing my experience attending UtopiaCon2016, and not really a review at all of the actual writing conference. I approached my trip by planning to attend as many panels and events as I could to make it worth the trip. But I also squeezed in as much sightseeing as I could.

I was scared to leave on Wednesday. I had to tell myself I wasn’t some college student taking a trip to visit a friend a state away. I was a forty-year-old woman who could go or do anything.

Everything went as planned, which was a relief, but I was also a little sad that I didn’t get any extra out of it. I mean, I’m glad I didn’t get a flat tire. I am thankful I never got truly lost. And I am beyond amazed that I only got one mosquito bite the whole time. They must spray the fuck outta that campground. 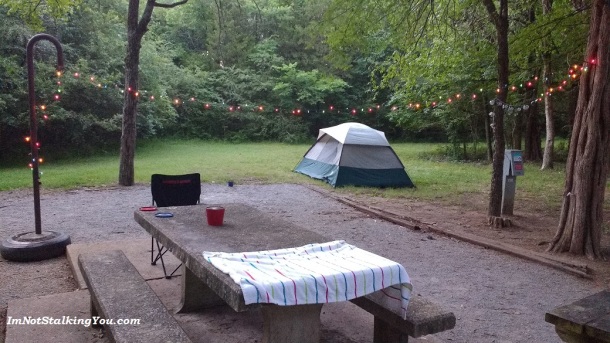 The Seven Points Campground sits on beautiful J. Percy Priest Lake. I was worried because the website instructed campers to store their food properly because “skunks frequent the campground.” I am very glad to say I never saw a skunk. I did see a deer on two occasions. And one 3-hour torrential thunderstorm

The campsite I wish I had, right on the lake. An hour after I took this picture, a deer walked right through there.

I had a mantra as I looked out the 10th floor windows of the hotel: I can’t believe I’m in Nashville.

It then evolved into: I can’t believe I am in fuckin’ Nashville.

A curse only meant as a compliment, I assure you.

I left the conference on Thursday feeling like a failure, for reasons I won’t expound on here.

By Friday at noon, it left me confused.

I did learn that husbands will get used to you being a writer, just give them time. And if that doesn’t work, give them bribes.

Everyone else seemed to go to Utopia to create friendships. (Maybe I was too distracted by the musical history of Nashville.) I desired this too. The result was I strengthened a few existing friendships, and made a handful more acquaintances. 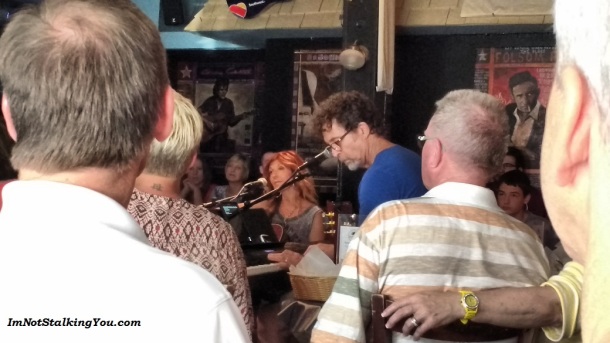 A performance at the Bluebird Cafe

But maybe that isn’t what the universe had in store for me. I have been with my husband for nineteen years. In that time I have rarely traveled long distance without him. I left this experience feeling strong and confident. Several people called me brave for attempting to travel and camp all by myself. I replied, “Brave or stupid.” But I did feel brave afterwards. I am the chick who has to have her husband show her how the unfamiliar shower works when I stay in a hotel. And I figured out the showers at the campground all by myself. And I even coped when the lights went out on me, mid-shower. Thankfully, it was not yet after sunset. I figured it was a result of a motion-detecting light (I’ve had that happen before), only to discover that the whole campground was blacked out. (I’ve also experienced that before—the result of too many RVs running their AC at the same time. I don’t want to listen to them run all night anyway. But I did, because most had generators they then ran. Oy vey.)

The gorgeous Opryland Hotel. It was unbelievable.

And I was scared to drive in big cities—big surprise, I still am. But for a few days I made Nashville freeways my bitch. I could merge in on the left side on a three-lane road only to merge over in ¾ of a mile to exit on the right. I regularly drove on a six lane highway—anything over five lanes gives me the heebie-jeebies, although my focus was so much on the road that my hands, wrists, and shoulder ached, and there was a giant dam next to me that I only managed to see one out of eight passes.

Maybe I have to improve myself before I can improve my writing and be a contributing member of a tribe. Or maybe I am just a giant dork. There is always that possibility. Or would that be a certainty?

Side view of the Opry stage.

While others were fangirling over authors, I was fangirling over the Grand Ole Opry. I got so excited that I couldn’t find it. Then I got hot weather, jerky & lemon cake, sick stomach. Then I spent all my time backstage taking pictures and not actually enjoying the experience. I stood on and touched “the circle” at the center of the stage. I did sit in the seats long enough to sort of feel as though I had really spent some time there and not just rushed through. The Ryman was known as “the mother church of country music.” The latest Opry still has pews rather than individual seats. It really felt like a religious experience being there. Last time I had that same feeling was at a Kid Rock concert (Early Mornin’ Stoned Pimp, anyone?). Why do I only experience that with music? Not when writing, not ever in an actual church.

ME ON THE STAGE AT THE GRAND OLE OPRY!!!

Saturday I spent the most time interacting with actual other people and having conversations. By Sunday morning, every time I would talk to myself (perfectly normal when you travel alone), I didn’t recognize my own voice. I had developed a southern accent. My mother had tried to call me the night before. Knowing I sounded “altered”, there was no way I could call her back until this passed.

It turned out to be only a 24 hour thing, like the flu, which made me a little sad. In a way, I liked my free souvenir.

My proof that I have been to Alabama, the setting of The Riley Sisters series.

The panels and talks I enjoyed the most were ones that were more emotional than informative. Heather Hildenbrand’s “The Audacity of Self-Love” had to be my favorite.

I’m not sure yet if I will return next year. If I do, maybe I should exhibit rather than attend panels. It is so confusing to figure out what the universe wants from you…

By coincidence, I stopped at the gas station across from this store coming and going. It amuses me.

Comments Off on Utopia Ever After or There I Was, in Six Lanes of Traffic… 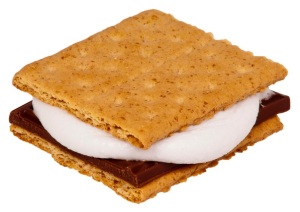 The traditional location to eat S’mores is camping.

Are you f’ing kidding me?

Why would you want to try to devour something ooey-gooey-chocolately delicious when you have a residue of dirt and mosquito repellent on your hands? And after you eat the S’more, you have a thick, sticky residue of marshmallow on your hands. Hand sanitizer or a cup of water isn’t going to rinse that sh*t off. I feel like camping foods should be easily clean-up-able. Hmmm. Maybe this is why my mother has never been a camper. (She likes things clean.  To the point of rubbing my son’s butt off after a poopy diaper change. OY.)

I don’t even think I had ever consumed a S’more until Nabisco came out with pre-made, microwavable S’mores in the 1990’s, called Suddenly S’mores. If you are trying to jog your memory, they came in a red package.

No campfire required! (Just a microwave.)

You can make them anytime!

They were the perfect proportion of chocolate to marshmallow to sweetened cookie graham cracker. Except for the occasional marshmallow burn on my finger, they were great! Except they came in inner packs of 2, and you had to make 4 at a time to really get all the yummy deliciousness that you craved.

If they still made them and stocked them in a store near me, I would still be buying them today.

But, alas, the closest thing I can find nowadays is the S’mores bar from Cabelas. It has a chocolate covered marshmallow sandwiched between the graham cracker. You have to be careful when you microwave it because if you leave it in too long the marshmallow will get huge and the top will slide off the bottom. They are kind of expensive. And have to be purchased at a Cabela’s store.

Another alternative, if you have a gas stove, is to toast the marshmallows that way.

But I still miss the microwave variety 😦

Does anyone else remember these?