The traditional location to eat S’mores is camping.

Are you f’ing kidding me?

Why would you want to try to devour something ooey-gooey-chocolately delicious when you have a residue of dirt and mosquito repellent on your hands? And after you eat the S’more, you have a thick, sticky residue of marshmallow on your hands. Hand sanitizer or a cup of water isn’t going to rinse that sh*t off. I feel like camping foods should be easily clean-up-able. Hmmm. Maybe this is why my mother has never been a camper. (She likes things clean.  To the point of rubbing my son’s butt off after a poopy diaper change. OY.)

I don’t even think I had ever consumed a S’more until Nabisco came out with pre-made, microwavable S’mores in the 1990’s, called Suddenly S’mores. If you are trying to jog your memory, they came in a red package.

No campfire required! (Just a microwave.)

You can make them anytime!

They were the perfect proportion of chocolate to marshmallow to sweetened cookie graham cracker. Except for the occasional marshmallow burn on my finger, they were great! Except they came in inner packs of 2, and you had to make 4 at a time to really get all the yummy deliciousness that you craved.

If they still made them and stocked them in a store near me, I would still be buying them today.

But, alas, the closest thing I can find nowadays is the S’mores bar from Cabelas. It has a chocolate covered marshmallow sandwiched between the graham cracker. You have to be careful when you microwave it because if you leave it in too long the marshmallow will get huge and the top will slide off the bottom. They are kind of expensive. And have to be purchased at a Cabela’s store.

Another alternative, if you have a gas stove, is to toast the marshmallows that way.

But I still miss the microwave variety 😦

Does anyone else remember these?

I often talk smack about my mom on here. But sometimes, she does have a rare moment of happiness or fun. I was toasting marshmallows on my gas stove the other day and it was one of those things that made me think of her.

Toasting a marshmallow over the gas stove. Not that that is my dirty stove.

We were not campers. I thought S’mores were only something that Girl Scouts and Boy Scouts made to get a merit badge. We didn’t have a BBQ grill or eat tacos until I was in middle school (She was fried steak and potatoes, all the way. Still is.).

But we would use a long meat fork and toast big marshmallows over the gas stove flame. It takes technique to not set it on fire. But it tastes so good when it is done (meaning half or completely burned). 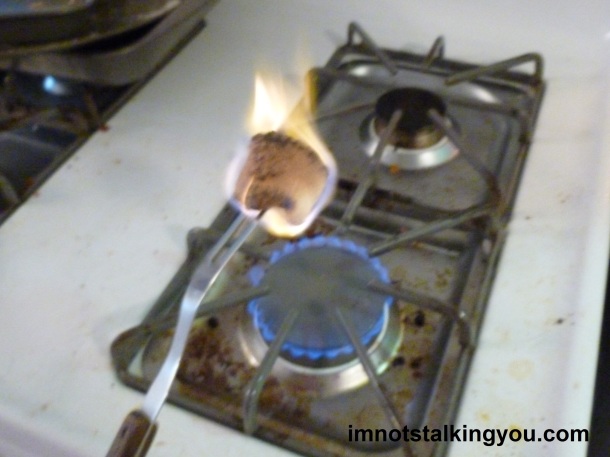 Excuse the blurriness. Hard to put out a fire while taking a picture. Not that that is my dirty stove.

Just note that you have to remove the marshmallow from the fork before consuming. Or you might burn your nose on the hot metal of the fork. Not that that has ever happened to me.

My mom did other fun stuff. Occasionally. We would go to the zoo. One time we chased the Goodyear blimp in the car because we saw it flying over a nearby field. She would race up to train tracks (not over them) so that I could watch a passing train. She could make up catchy rhymes about children who died 100 years ago. We would have strawberry shortcake for dinner. She let me skip 5th grade Field Day and took me to the lake instead. She took me to the lake and the pool, although she would never wanted to get in the water herself.

Today is her birthday and I salute her.
Without her, there would be no me.

I already have been known to turn around so my son could watch a passing train. I will teach him how to toast marshmallows on the stove. Just as soon as he gets past the “I don’t want to to be sticky” phase. (Wait…that is only MY little boy?!)

Just don’t tell my mom I have a blog, alright?