I dreamed last night that I went to Taco Bell for a caramel apple empanada. When I got there, they were revising their menu and most of it was covered over in pieces of cardboard. My delicious, sweet, fried empanada was no longer there.

It made me sad. The dream was very realistic because usually my favorite foods get discontinued. Does anyone else remember Kraft having frozen meals? I was particularly fond of the ravioli filled with mozzarella. There is a great family (meaning just my mom and I) story about me turning around quickly in the kitchen and all the ravioli and tomato sauce slopping off the plate with the centrifugal force my body created. Man, what I wouldn’t give for that plateful of cheesy, tomatoey gooey goodness one last time.

At McDonald’s? Chicken nuggets have stood the test of time, with varying degrees of quality through the decades. A Big Mac, supposedly their signature sandwich? I could care less. I only ate them when I had a year’s worth for free. Even then, I had to order it without the special sauce. But their apple pies? Oh, how I loved those. And no, not the BAKED doughy version they have now, filled with apples slices that are too large and topped with a pile of cinnamon. I love cinnamon, I truly do, but I don’t want it all piled in one spot on top.

Oh God, I would give my pinky toe nail for one of those right about now.

No, I loved the McDonald’s apple pies of my youth. I believe they went by the wayside in the early 1990s. They were fried, because the outer shell was all golden and crispy. The texture was all these tiny little air bubble bumps along the outside. When you bit into it, it crunched with deep-fried deliciousness. Usually you also burned your lip on the steam, if not on some of the extra-sweetened apple goo that would get stuck to your lip that would continue to scald until you could manage to lick it off and burn your tongue in the process. 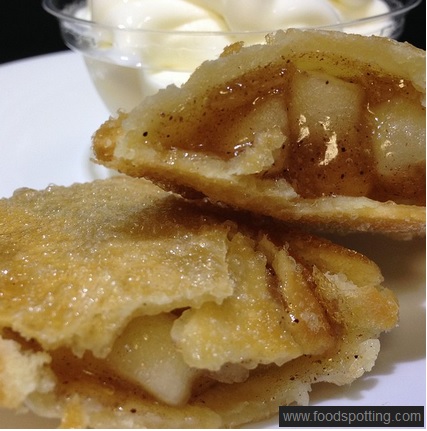 Inside were diced apples, all uniformly sized in their heavily processed form. It was the definition of DESSERT, as much as you can have without chocolate anyway. It wasn’t a half-assed attempt to make your dessert healthy, with the baked and the less sugar nonsense.

The caramel apple empanada dream upset me so because that is the closest thing I have found that I can still get that reminds me of the old McDonald’s apple pies.

I am apparently not the only one still pining for this fruity delight. There are recipes all over the Internet trying to duplicate the taste and consistency of the original: you can find one here. I am afriad of hot grease, so my attempting it seems highly unlikely. There are still infrequent fried apple pie sightings across the United States, but they seem to be harder to find than a needle in a haystack.

Holy crap! Look at what they serve in Japan. I would totally try that.

Now go on about your day. Just try not to think about the crunchy, gooey deliciousness that you can no longer have. Because you can’t. It’s gone. It has gone by the wayside, just like MicroMagic cheeseburgers and old Wendy’s French fries.

Now you can’t stop thinking about them, can you? Your mouth is watering. It would be a great trifecta of garbage food filling up your stomach. Excuse me, I need to take off now and, um, drive thru, I mean drive to the store. Yes, yes….that’s what I meant… 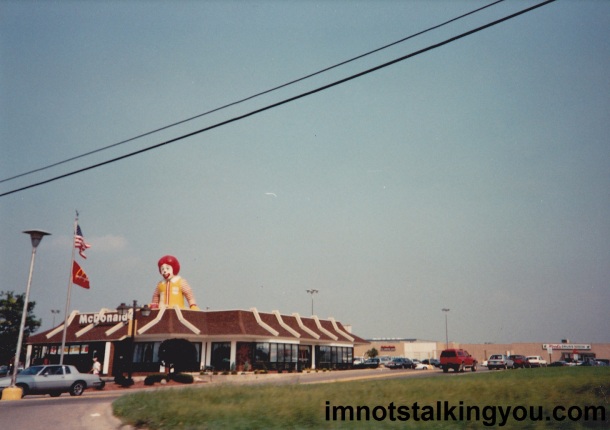 Have you seen the new McDonald’s interior and exterior design? You must have. (By the time things come to Lenawee County, they have already been through all the major cities and most medium and small ones.) I hate it.

I like the old exterior design, with the slanted roof and parallel lights. It sort of looked like an overgrown shack. You saw the building, and you instantly knew what restaurant it was and what kind of processed, sodium-infused goodness lay inside waiting for you. It seemed like they usually featured the colors red and yellow. Signature colors. Ketchup and mustard.

New South Main McDonald’s in Adrian, front (or back)

The new design sucks balls. (Is that a valid argument?) It is just like a beige box, with some yellow accents on it. My husband said, “You know what they are trying to do, don’t you? They are trying to make-it look like a sit-down restaurant.” And I believe he is absolutely correct. (More on my thoughts on the interior in a minute.) Except for one small detail:

There are now two drive-thrus.

Problem #1: In at least one location that I know of, the outer menu board blocks your view of the inner lane. You can’t tell there is a car in the inner lane until you move forward and hit it.

Problem #2: In at least one location that I know of, the outer menu board is set up so that you cannot see it from the speaker while ordering (a different location than Problem #1, but same city and franchise owner).

Problem #3: Where the two lanes merge it is like a construction zone traffic jam on the freeway. Except everyone is hungry. It has the potential to be road rage. Or hunger rage. Or drive-thru rage.

Enough about the drive-thru. Let’s move inside, shall we? The previous design was functional for families with litters of kids, old people drinking coffee while reading the paper, and for high schoolers to lazily half-ass clean. It was colorful and bright. 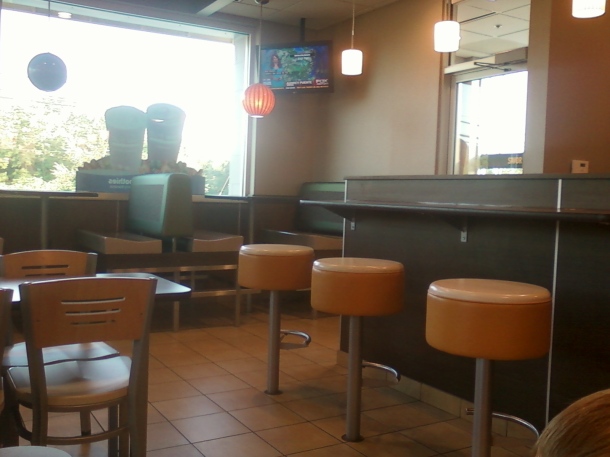 The new interior is heinous. It is what I picture Starbucks to look like, although I have never actually been in one (I don’t drink coffee, remember?). One version I have seen had fancy light fixtures hanging from the ceiling. Another had partitions between the seats with wheat inside the glass–>wheat! The new thing seems to be darker wood and dimmer lighting. And having some tables pub-style, meaning higher than a typical table. Not safe for short young children or unsteady old people with hot liquid. 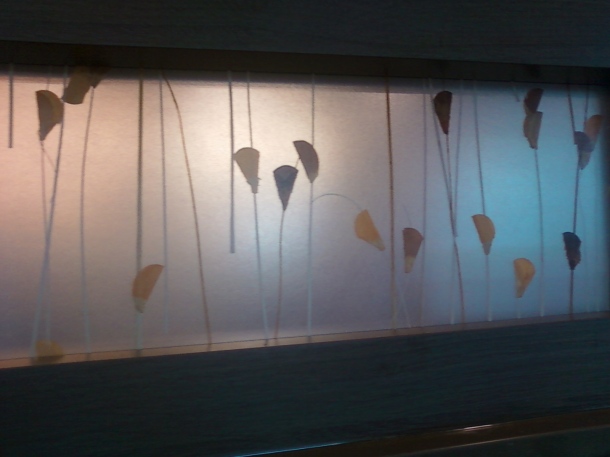 New partition between booths at North Main McDonald’s in Adrian (I guess it isn’t really wheat, but I still don’t like it!)

If I concentrate on one location, I can give more specific details. We will use the South Main McDonald’s in Adrian, Michigan. This location was probably a little unique because not only did the building get the new design, the old building was torn down completely and it moved down the street, past Bob Evans and the vacant Long John Silver’s. The new South Main location sits right on the corner of US223 and M52. Prime real estate. I believe the franchise owner wanted to make this move for years. Too bad the building looks like it was build the wrong way around. 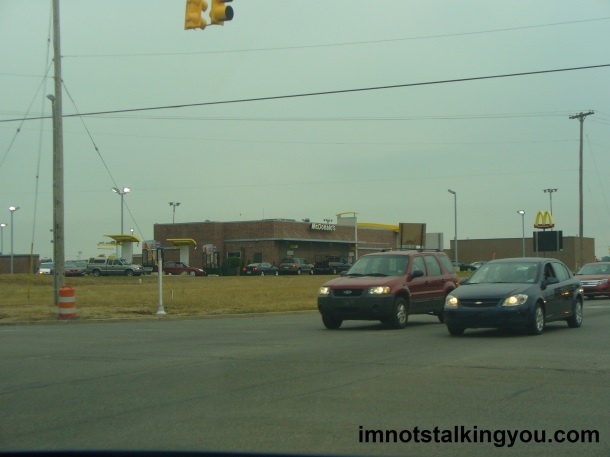 I believe the South Main McDonald’s was built backwards. Sitting at the corner, waiting for the unbearably long traffic light, you should be looking at the front of the restaurant and thinking, “How fast and filling the food would be. Immediate gratification.” You shouldn’t be sitting at the traffic light thinking, “That food would be fast and filling, but the drive-thru is way too busy.” Which is what anyone who has driven past it has said. Oh! And having the drive-thru speakers aimed at one of the busiest intersections in the county makes it hard to hear and hard to be heard.

The old South Main had oodles of seating. So much so, that they blocked off part of it and made a separate room for kids’ birthday parties. The new location has less seating, even though it is now in a more prominent location (and I believe is busier). Much of the possible seating space is gobbled up by the children’s Play Place. Isn’t buying your kid a Happy Meal and then sitting in the play area just throwing your money away? Either your kid will play and not eat or whine that you won’t let them play and not eat.

Since I am on the topic of McDonald’s and I hold grudges, I will take this opportunity to express my dissatisfaction that they no longer carry the flaky, crispy apple pies I used to love. I think they have been gone about 20 years now. Replace by those “baked” jokes for a pie they have now. (If you want a reasonable facsimile of the old pies, go to Taco Bell and order a caramel apple empanada. Yum.) I also greatly miss McDonaldland Cookies (shaped like McDonaldland characters) and Chocolatey-Chip Cookies (mini and crispy). And I miss that the Dundee, Michigan McDonald’s used to have an outdoor McDonaldland playground. Each piece of equipment was a McDonald’s character. I remember a Grimace shaped metal bouncy thing and Mayor McCheese monkey bars. There were more I can’t remember. I am sure that wasn’t the only one in the world. It has been replaced by an indoor playland:(

You can make the inside of your restaurant look all hoity-toity if you want to, but you are still going to have a grandma in there begging her granddaughter to eat a French fry. It is the natural order of things. It is the American way.