Jem is awesome. It is a cartoon rock’n’roll soap opera from the late 80’s. It has everything a pre-teen girl in the 80’s could have wanted: glamor, glitter, fashion, fame, exciting adventure, a boyfriend with purple hair and eyes to match. *sigh*

I remember I used to come home from school and watch Jem. A lot of days I would go over to my asbestos friend’s house to watch it with her. Although she was always grounded and not allowed to watch TV afterschool or have me over. (Her mother thought I was a bad influence. Maybe she is right. I did get my asbestos friend into blogging-hehehe.) I remember one time when her family’s floor model TV was dying. The whole picture showed up in one tiny strip across the center of the TV, maybe only two or three inches vertically. But we watched Jem on the distorted TV anyway.

Jem and Hannah Montana have a little in common. Both are series about pop stars with secret identities. Miley Stewart is to Hannah Montana as Jerrica Benton is to Jem. Jerrica turns into her rock star alter-ego Jem with the help of a hologram from super-computer Synergy. Jerrica had special earrings that allowed her to speak to Synergy whenever she needed. (By a total coincidence, I happen to own earrings that are very similar to Jem’s.) Jerrica as Jem gets her sister and foster sisters together and they start a band called Jem and The Holograms (get it?), in an effort to make money for Starlight Music which will in turn support the Starlight House, filled with foster girls. The Holograms are Aja, Shana, and Jerrica’s sister Kimber. 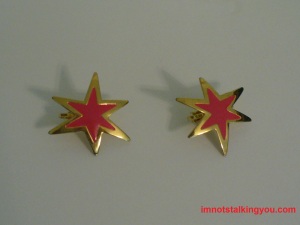 Every episode featured three mini music videos. Some of the songs are actually quite good. I used to tape them using my cassette recorder. Some were sung by Jem and The Holograms, some by their rival band, The Misfits. The Misfits are very bad. In many episodes, they literally are trying to kill Jem. My husband has seen bits of a few episodes and he is like “they would be so arrested for that.” But, somehow, they never are. The Misfits are made up of Pizzazz, Roxie, and Stormer. Stormer isn’t actually bad. She just has no backbone to think for herself, therefore she follows. Later, both bands would get an additional member.

All the Holograms know about Synergy and that Jerrica and Jem are one in the same. Too bad Jerrica’s boyfriend Rio doesn’t know. He is the long suffering Starlight House maintenance man, Hologram’s roadie, engineer, bodyguard, and Jem’s personal guardian angel. He doesn’t get paid enough. He deserves better. Rio is supposed to be Jerrica’s boyfriend, but then Jerrica as Jem is always hanging all over Rio, confusing him. Rio looks pretty much exactly like a Ken doll, but with purple hair. But it suits him. I am rewatching episodes on streaming Netflix now, and I do not think Jerrica ever tells him the truth about Jem. What a bitch.

I really liked in the third season when the writers added a third band. They were called “The Stingers” (bad name). They feature a male lead singer named Riot, along with rocker chicks named Minx and Rapture. It was nice to have more testosterone on the show, along with Rio and evil Misfit manager Eric Raymond, to balance out all the girl power. And it was nice to have some songs sung by a guy. Of course, Riot created love triangle with Rio and Jem. If you count Jerrica, that makes it a love square. The Stingers definitely were not good, but they weren’t always evil either like the Misfits. They sort of just played every situation to their advantage. Jerrica was such a goody-goody. Boring. Always keeping everything organized. Jem enjoyed the spotlight and let herself get swept away sometimes.

This was one of the cartoons of the 80s that Hasbro used to sell toys (Transformer, anyone?). I never bought any Jem dolls. Now I sort of wish I had. Although I remember them as not really looking like the cartoon characters that much. But that was the amazing thing. Although the writer, Christy Marx, was told to make a cartoon to sell a toy, she went way beyond that. She created Starlight Music, Starlight House, and all the various relationships between the interweaving characters. Even the Starlight Girls had a bit of screen-time and well-developed personalities and some back story. I am saying don’t dispell this as just a dumb fluffy cartoon. It has real heart and stories. (Just don’t keep count of how many times Rio has to rescue Jem from an avalanche;)

The fashions on the cartoon are so…80’s. I think the only way to really know what that means is to have lived through it. Stripes, polka-dots, ruffles, bows. Big, colorful hair. You name it. All on the same outfit. On the same person. The makeup is also crazy. Just random streaks of makeup across their cheeks, like little kids would do to dress up like an Indian for Halloween.

I liked how everyone’s nickname told their profession. Video made the videos. Danse danced in them. Techrat knew technology and had the personality of a rat.

How Synergy could create holograms around the world, I will never understand. Or how no one realized Jerrica & Jem were the same person. Apparently changing your hair from blond to pink is the equivalent of Superman removing his eye glasses. I mean, both women hung out with all the same friends. You would think that would be easy to figure out. Maybe Jerrica wasn’t a bitch, maybe Rio was just really dense. He also should have dumped Jerrica for never putting out.