COVER REVEAL: Be Careful What You Wish For

I have been toiling away at my computer to get the next Riley Sisters book out into the universe as quickly as possible. I promise you, I am making progress, albeit very slowly. You know, real life gets in the way and all that. But I assure you, I am still on track for a January 2016 publication date. (Ask me next week, and I may have a different answer for you…)

If waiting for Miley’s story is killing you, then maybe a sneak peak at the cover will help. Now, you have to understand, Miley is different than her sisters Jane and Kiley. Miley is open to more exciting adventures. She isn’t really bothered by a pesky sense of responsibility. She is looking for life to be fun. Which, somehow in the pursuit of that, it kind of turns out the opposite for her.

Just to remind you, here are the juicy details:

Miley Riley always dreamed of being famous in the spotlights of Hollywood. Achieving those dreams seemed pretty unlikely coming from the Podunk farm town of Oakley, Alabama. With no talents and no college education, she had settled into her career as a party planner and sharing an apartment with her on-again, off-again boyfriend. When the movie based on her twin sister Kiley’s book begins shooting in California, Miley wastes no time in making the trip with her for a once in a lifetime vacation. Her wildest fantasies come true when she meets a dark-haired heartthrob, rising movie star Mark Tennyson. Their relationship heats up quickly, much to the chagrin of Miley’s family and best friend Travis.

When her new L.A. life begins to publicly crumble, Miley discovers who she can really count on. The road back to her real life returns her to Alabama, but will be filled with unconventional risks. Miley will learn to Be Careful What You Wish For…

I present to you, the cover Book 3 in The Riley Sisters series, Be Careful What You Wish For. 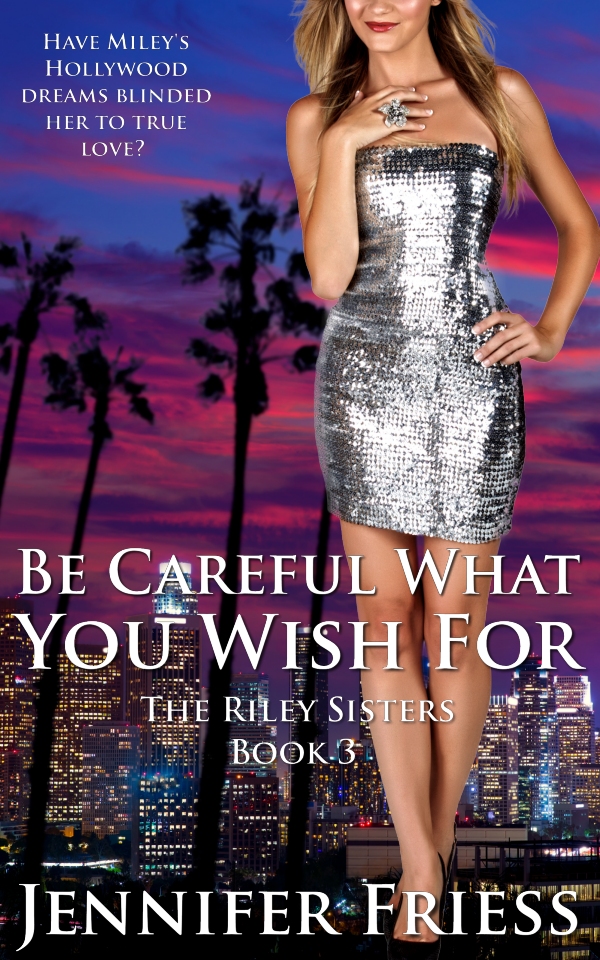 Be Careful What You Wish For by Jennifer Friess, due January 2016

While I’m at it, I will mention that The Wind Could Blow a Bug and When You Least Expect It are now available on more sites and at more stores, making it easy to catch up with the other Riley Sisters before Miley’s January 2016 debut!

Thanks to all my readers! This would not be nearly as much fun without you!

Comments Off on COVER REVEAL: Be Careful What You Wish For