Attending the Great Lakes Book Bash a few weeks ago as an author signing at the event, it hit me how lucky I am to finally be doing what I should have been doing all along. Even if I never get past publishing three books (which I sure hope-to-shout I do, as more stories are in my head, pushing every day to get out), being able to produce something I am proud of and being able to semi-easily get it out in front of people is awesome! (Still working on how to get my books in front of the RIGHT people, but, all in good time, I guess…)

I feel like there are people along the way who were instrumental at me getting to this point, and they probably are not even aware of it. I feel like now might be the time to give them shout-outs. It wouldn’t be possible to do them justice in the back of a paperback on the flat page–I require links and multi-media.

I have already blogged about past teachers, such as dear Mrs. Raines who gave me my all-time favorite book way back in 2nd grade and dear Mr. Clark who put up with my crazy, even making me co-editor of the school newspaper when I never would have selected myself for such a job.

I feel like I should also mention my asbestos friend. We were writing buddies in 8th grade, and we still are now. (And I’m not sure my subject matter has changed all that much 😉 ) Extra kudos to her for being my beta reader. And apparently Linus to my Charlie Brown.

My best friend was fundamental to my development as well, although we enjoyed more art and drawing together than words. I don’t draw much anymore. But I love to do off-beat craft projects, such as Werecart creation and mystical giraffe repair. The skills I honed around her have now been funneled into logo, advertisement, and marketing materials.

In college one day I was talking with the head of the English department. He realized I had taken a butt-ton of classes in his area. He asked me why I didn’t minor in English. I said I wasn’t really interested in any of the higher level classes, which I would need for it to be an official minor on my transcript and all that. He suggested I just take an independent study with him. A class where all I do is write whatever I want to? Awesome! Too bad the story I worked on that semester sucked. But it was nice for someone to have yet again directed me closer to something I was already interested in. It seemed like most of school was crap I would never use again. (Algebra, I am talking about YOU!)

I was never a big reader (don’t be so shocked). I was always in love with television and the stories it told and the visual and aural (get your mind out of the gutter) experiences it could offer. If I grew up in today’s bounty of technology, I would probably be making programs on YouTube now rather than books. After all, Radio and TV production is what my bachelor’s degree is in.

Somehow “bachelor’s degree” made me think of Bachelor Chow from Futurama.

Speaking of which, I guess I should thank Steve in the Communications department of my alma mater for giving me A’s, and the delusion that I could create my own Riley Sisters series book teaser trailer. Blame him. It was great fun to make though! Click on the link below.

I did have plans to become a writer. When I got my first big grown-up job, I even bought myself a Word Processor. (It was 1999. I didn’t know any better.) I sat in front of it, and realized writing was hard. So, I made a conscious decision to give up that dream… until years later when I would learn that I must write because I can’t not write.

I should thank the now-defunct Borders, for providing me with invaluable book industry knowledge that I learned through osmosis from all those in cubicles near me (or those who were in cubes further away and were just loud). I got to experience first hand the evolving business of books, and the dire consequences of falling behind. I began my current venture with more awareness about the industry than many do.

And thank you to my green-haired friend and my crazy friend, my co-workers along the way, who kept reminding me daily how much I loved to write. Whether it was a fresh-off-the-presses poem I wrote, one they composed, or just reciting song lyrics to one another, they were continuous reminders of how much the written word touches our lives every day. (If I could say that about Borders, they might still be in business.) Creativity, in any form, is essential to our lives on this planet.

I didn’t really read, and find out what I liked to read, until I got my own apartment in June of 1999… and had no television for a month. I read a lot of books in that time. And I fell in love with Gaia from the Fearless series by Francine Pascal. For more on them, click here: https://imnotstalkingyou.com/2012/03/14/fearless/ While all the books are not cohesive (and I don’t even think they are all penned by Ms. Pascal), they drew me in and kept me hooked. I have been primarily a YA fan ever since.

But I never imagined I could write one until I read a little book called Twilight that changed my life in a lot of ways. For more about my Love of Twilight, start with this post: https://imnotstalkingyou.com/2012/11/08/love-of-twilight-part-1-the-books/ Some people skewered it for not being a tome of high-brow literature. But that is not what it was ever intended to be. And that is exactly what I found accessible about it. It seemed like something my asbestos friend and I could have written. This opened my options back up to writing again, but I still wasn’t actually doing it more than in my dream journal. For more on the dream journaling, click here: https://imnotstalkingyou.com/2012/11/01/dreams-part-one-dream-journal/

I would never have a blog if it wasn’t for my former co-worker Dane. One day he mentioned that he had one, and I was fascinated. Anybody could get one of those? And FOR FREE? I pondered it for several weeks before I took the leap. What would I write about? Would I run out of things? The answer to the second question is apparently “no”, as it is now 4 1/2 years later. And the blog, well, that kept me writing until a big idea struck me, and then I had a book. And another. And another. And it is all Dane’s fault, because he had a blog and I wanted to copy him.* It is one of my fondest memories of him. That, and the time I was in a meeting sitting next to him and I felt my in utero son kick for the first time. That was just a coincidence, I think.

And thank you to my sister-in-law who, when I told her that I thought I might be writing a book after we had gone to a showing of the movie Safe Haven, didn’t laugh at me. She was one of the first people I told. That was The Wind Could Blow a Bug.

The Wind Could Blow a Bug by Jennifer Friess

Thank you to my dog Dave for letting me pet her furry long orange coat when the anxiety gets to be too much. She just senses when I need her. Except if she is sleeping really soundly–she is coming up on 13 years old, after all. She is never allowed to die. She knows this. I tell her every day. 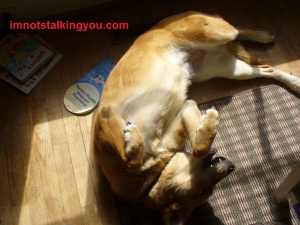 Of course I have to thank my son and husband for putting up with my fits when the computer breaks or I cannot find something and my whole world seems to be falling apart. And a million other things that can’t all be listed here. I also thank my son M for not destroying a whole box inventory of my books… yet. (I feel like that day is coming.)

And to anyone else I may have forgotten– My head is stuffed full with fictional towns and characters. Sometimes that makes it hard to process life properly.

*Note: This does not entitle Dane to any royalties from my burgeoning writing career.

Follow the romantic entanglements of The Riley Sisters in my books:
The Wind Could Blow a Bug – AVAILABLE NOW!
When You Least Expect It – NEW RELEASE!
Be Careful What You Wish For – COMING JANUARY 2016!