RSS Feed
← POEM – kissing a grizzly bear
COVER REVEAL: Be Careful What You Wish For → 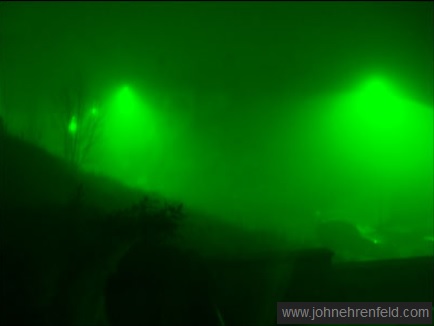 My earliest memory is of being awake super early in the morning standing in my living room. Like, maybe 5:00AM. It is the only time as a kid I can remember being up that early. Captain Kangaroo was on. It was only on very early in the morning. That was the only time I ever watched it. (And it was kinda weird.) I remember the screen on the color television being kind of greenish, because it didn’t work right and the tubes were going out on it or something. I looked out the tall window at the end of our living room in our old farmhouse, and there was a wall of green fog outside. It was so thick I could not see our next door neighbor’s house. It was as if an alien ship had landed outside, the lights from their ship reflecting off of the fog. It was strange and frightening, but also exciting at the same time.

That might all sound super fake and trippy. And, I will admit there are probably inaccuracies in it as my brain has been rotted over the last 35 years by too many Pop-Tarts and watching too much Beavis & Butthead while I was in college. I would say I was probably only three or four years old when that all took place.

But I know there is some truth in it, because my mom remembers that day too. Just a little differently than I do…

She remembers it as a day when, in a fit of stubbornness the night before, I told her I was not going to go to sleep. And, well, apparently I didn’t. (Most every kid threatens it, but very few follow through. I was a determined little Capricorn!) She says it was incredibly foggy that morning and there was an eerie green glow to everything. She needed to go to the post office that morning, so she loaded me in the car…where I promptly fell asleep.

Now, this was Riga, Michigan, a quaint but tiny farming town. The post office was literally a 65 second drive from our house.

I find it interesting that even at that young age I would defy her on purpose, just to be difficult. I guess that proves there is no hope for stopping that habit now.

Follow the romantic entanglements of The Riley Sisters in my books:
The Wind Could Blow a Bug – AVAILABLE NOW!
When You Least Expect It – NEW RELEASE!

To be the first to see the upcoming COVER REVEAL for Be Careful What You Wish For, Book 3 in the series, sign up for my newsletter here: http://eepurl.com/7YhHr

Comments Off on My Earliest Memory