Various summer projects have been keeping me busy.

This started with repairing our fence that was blown down a year ago. (See this post for picture: https://imnotstalkingyou.com/2017/03/10/blow-the-fence-down/) Digging post holes is a bitch.

Then we had to repaint our garage. It had peeling paint when we moved in 14 years ago, and well, it has only gotten worse. It was just as daunting a task as I had always feared it would be. But, it was worth it. 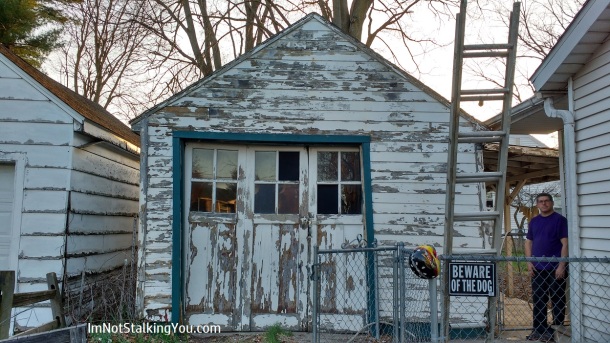 This is after we scraped, before it got its new coat of paint.

The garage project got sidetracked by my need for a gazebo. I have always wanted one, but this year prices dropped enough for it to become a reality. I got the model with both bug screens and privacy panels. It was so worth the money to have both. I may be referring to it as my “she shed”.

Spending more time in our yard made me realize that we have neglected it for the last eight years or so, which is also how long my son has been around. He has a way of sucking up our time. In a good way.

I started doing things I haven’t done in years like weeding, trimming, putting down accent pieces. I remembered how I always hated how the dogs would disappear behind the garage late at night. I would have to go back there to get them and there was no lighting and it was so dark and scary. So, with no idea if there would be enough sun to charge them, I installed solar lights on the fence. FYI-there is enough sun to charge them, even if not fully. 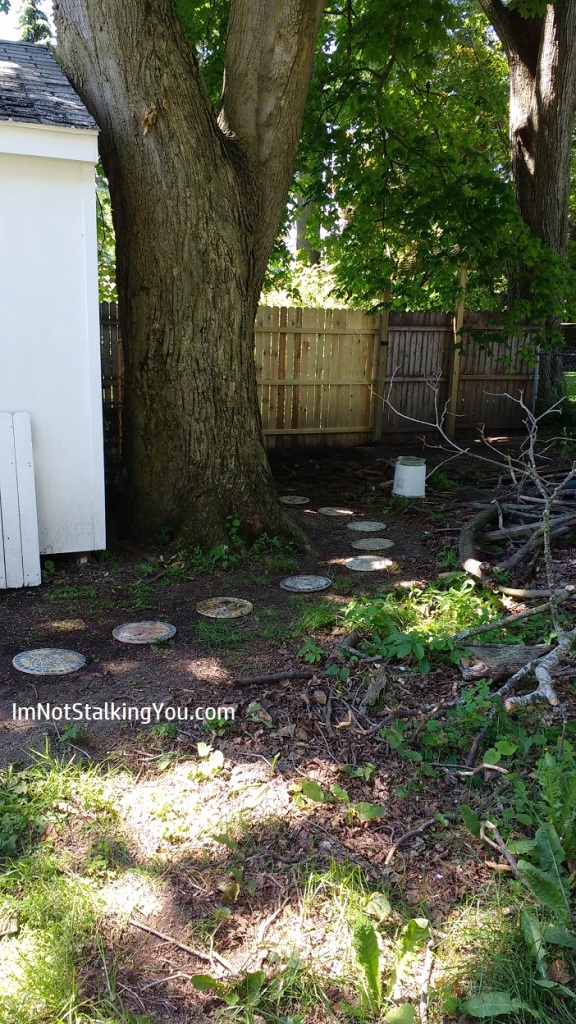 The path goes to nowhere, but at least I get to use my decade’s old stepping stones again.

We even planted a few plants and a garden, except something is eating my sunflowers’ leaves, they are short even though I purchased the mammoth variety, and now my pumpkin plants are dying.

My idea is to make my backyard a little haven until we can afford a camper to go spend time in.

Next year, on to the front yard.

My backyard is pretty enough now to hold a party. But for what occasion? 😉

Come back for my post next week to find out!

Your past shapes you. It can’t be undone.
ANGRY MACEY
NOW AVAILABLE $.99!

Have We Forgotten Our Dead?

The first one, St. Joseph’s Catholic cemetery in Adrian, Michigan, had their drive blocked with orange construction cones.  It seemed they had decided that a week before Memorial Day was the optimal time to put fresh tar in the cracks of the paved drive.

Really?  How does that make sense?  To block people out of the cemetery at the one time of year when they are guaranteed to want to visit?!

As I didn’t want to get fresh tar on my car (the hail damage is enough to give it character), my mom and I made alternate arrangements to come back on Wednesday.  Surely it would be open again by then, right?

Next we visited Pleasant View cemetery in Blissfield, Michigan, where my dad is buried.  There was no sign of the flags that they always put on the graves of veterans.  The place had not even been mowed.  There were branches and stray bits of liter everywhere.

My mom is very particular about millions of things in this world.  Most of which I DO NOT and WILL NOT ever understand.  But on one thing I do agree with her, and that is that you should place your flowers at the cemetery after they have mowed.  Otherwise, your artificial flowers get dirt and grass thrown all up in them and look terrible.  But, having no other options, we placed our flowers at that time.  Next to my dad’s tombstone is a concrete marker in the shape of a lamb for his sister, who was born and died before he was ever born.  It probably isn’t made out of very quality materials to begin with, and it has been there approaching 100 years.  But we could plainly see where the riding lawn mower clips it when it goes between the stones. 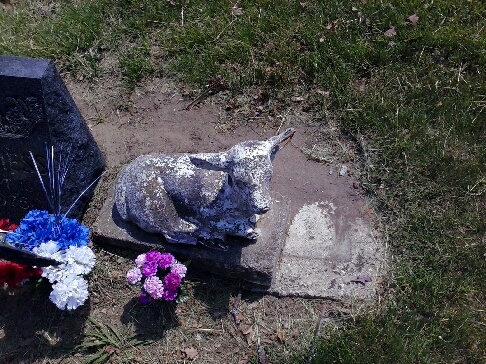 You can see where I pushed away the dirt with my foot to expose the original resting position of the lamb.

These stones are the only thing left to mark these people’s lives (in this instance, of a deceased baby who never even got to live her life), and you have to carelessly push them over on their foundations?

When my mom and I returned to the St. Joseph’s Catholic cemetery on Wednesday, we witnessed the same thing.  The place had not yet been mowed.  The tombstones on the ends had been moved on their foundations, from previous passes with the mower.  I tried to push one back into position, unsuccessfully, and almost gave myself a hernia.

Oh, and FYI, there were STILL cones blocking the entrance to St. Joseph’s.  It appeared as if they had seal-coated the drive as well.  I drove around the cones.  (It had already rained the night before.  Any of the coating that was going to come off would have already been washed off.)

Aside from the shotty groundskeeping, I also noticed that WE, as surviving family members as a whole, are not decorating.  The entire section my dad is located in was almost devoid of flowers.  Everyone in his section generally died in 1980 or before.

Now, looking across the cemetery to the newer section, it did appear to be very decorated.  I guess all the people in the ground in the new section are the ones who used to decorate the tombstones in the old section.

How sad is that?

Even sadder is that they never told their children that someone had to keep decorating the grandmas’ and grandpas’ when they themselves had moved on.

Decorating gravestones is very similar to how I feel about sending greeting cards.  I know that it is an extra expense, but we lose a little of our humanity when we decide it is not worth our time and bother anymore.  A website exists called Find-A-Grave.  It is a great resource for genealogists.  But, you can also leave “virutal flowers” for people.  I have an issue with the “social media-ization” of the dead.