This week I learned that my husband starts a new job–yaaaa!  It is a factory job and he really did not enjoy the one he had before.  So, here is to hoping he can get a little enjoyment out of it while making money to pay the bills.

Personally, I learned that employers want you to have giant windows of availability. I happened to get an interview last week for a place that I submitted an application to in December. At that time, I told them I could work any of the 18hrs that the store is open. This was true for the past 3 months since then. Of course, 6 hours after they call me for an interview, my husband gets the call about his job. Which, it turns out, he won’t find out what shift he will be on until Wednesday. At my interview, it turns out I need to be available to work 10am-10pm Monday through Sunday to be hired. We left it at “I would get back to him” if my husband’s schedule turns out favorable. That might be a great schedule if I had like a 12 year old who could take care of themselves. Not so great for the mother of a two-year old who most likely could not afford daycare on that salary.

Today (which should really go on next week’s post–deal with it) I learned that actor Billy Burke, Charlie Swan from the Twilight movies and currently starring on NBC’s Revolution, sings. As in, records songs and videos and stuff. Heh, who knew? Check him out here: www.billyburke.net/

And finally, cleaning up leftovers from like two weeks ago, here are further duct tape projects I made after the tote bag, before becoming distracted by a much larger creative project. 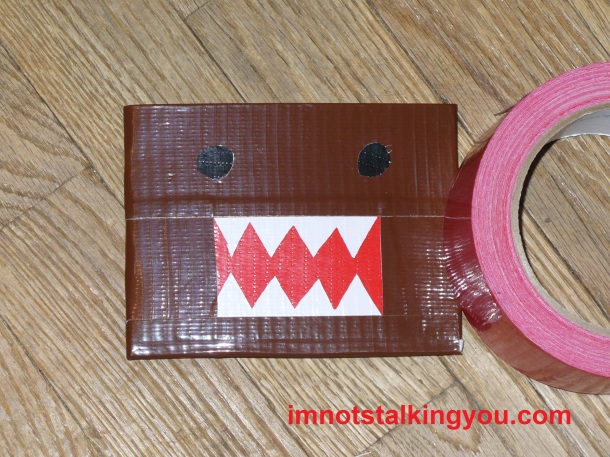 Domo Wallet, made from duct tape, outside 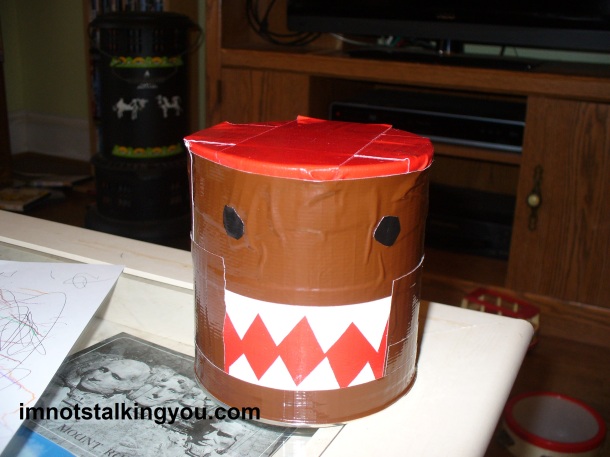 Domo drum, made from duct tape and a toddler snack can