RSS Feed
← WKRP: Baby, If You Ever Wondered What Would Happen If Johnny & Bailey Got Together – Part 2
Who You Gonna Call? →

This week I learned that for all those odors that just won’t come out of your laundry, you need baking soda.

I know, you are confused. Yes, we wash our clothes and blankets. Yes, we use detergent. But some odors are more resistant to soap than others. And for those, you need baking soda.

My son is potty-trained in the daytime. But, well, not so much at night. I was having him sleep in Pull-Ups (the nighttime kind with extra absorbency, because he doesn’t just have a little leak…). But then I was afraid that maybe he couldn’t feel that he was wet or that maybe it was hampering his development in this area. We tried for a while with no Pull-Ups. And we were greeted with about a 40% success rate. That means a lot of sheets got washed. And pajamas.

We use Unscented Tide, I’m not sure why, and so there is no perfume to drown out any residual smells. We haven’t had fabric softener or dryer sheets in the house lately either. So the sheets would still smell a bit like pee, even after the washer and the dryer.

An even longer existing problem is the scent of our comforter on our bed. I wash it at the end of the year, but it still smells like the dog(s) who lay on it. I started drying it with dryer sheets. Still smells like dog. I packed it away in a garbage bag for the winter with two dryer sheets. As soon as I bust it open in the fall—yup, you guessed it, DOG. I LOVE my dog, but really desired my comforter to not smell like them after I had spent $5 at the laundromat to remove it. 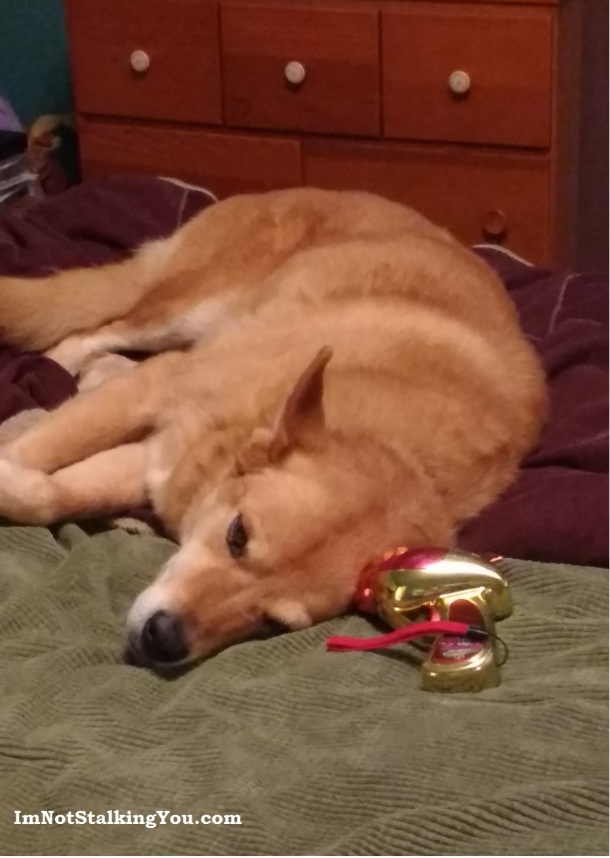 Dave sleeping on the freshly-laundered comforter…with a gun to her head.

Then I realized there was a big box of Arm &  Hammer baking soda on the shelf in my laundry room above my dryer. I faintly remembered that my husband used it when he washed his work clothes. I had only ever really used it for baking, but baking soda is always touted for removing odors, so what could it hurt?

I put the recommended cup of baking soda into my washer with the sheets and the liquid detergent.

And you will never guess what happened…

So, then I tried my usual routine with the comforter, except with about a cup and a half of baking soda.

And you will never guess what happened…

Dryer sheets! Because I dried it with two of them. But absolutely no dog odor!

That is, until I brought it home and the dog laid on it again.

So, this is my Public Service Announcement for the year. Hope you found it helpful and appreciated it.

Posted in A day in the life and tagged Arm and Hammer, baking soda, clothes, comforter, detergent, dog, dryer, laundry, odor, pee, scent, sheet, sheets, smell, urine, washer. Bookmark the permalink.
← WKRP: Baby, If You Ever Wondered What Would Happen If Johnny & Bailey Got Together – Part 2
Who You Gonna Call? →