It is all the fault of the Starz advertising department.

They plaster my Entertainment Weekly magazine with advertisements for the television series. Last fall, they only let me watch the first episode on their website–that was all.

Wet my appetite, but don’t let me actually binge myself. Aye, tis shameful, it tis.

Like an idiot, I liked the Outlander Facebook page. Now I willingly torture myself with advertisements for a show that I do not have the channel to actually watch it on.

I swore I would buy the DVD of Season 1: Volume 1 when it came out. Then I got cheap.

I had had it. I had to consume more of the story of Claire and Jamie.

I asked my asbestos friend who has a large book collection and reads everything if she had a copy of the Outlander book. She did not. At this point, I remembered that my son had forced me to get a library card at Thomas DVD-point a few days prior.

Maybe it would come in handy for me as well!

I asked the librarian if they had the book. I knew they would have it in their collection. I didn’t count on it being checked out. They asked me if I wanted to put a hold on it. Turns out, they had the DVD too! Which is what I really, really actually wanted. Hold them both!

Why the F is Jamie wearing pants?  He NEVER wears pants.

A secret that isn’t a secret: I prefer television to books. Are you going to come to my house and take away my writers card now? Fine, but purchase one of my books on your way out. If I had been born 20 years later, I would be making my own home TV shows and editing it on a Mac right about now. But, alas, I was not.

A day or two later, I was at the library for their Used Book Sale. I tried to manifest a copy of Outlander. Although I was early to the sale, no such luck.

The next day, I couldn’t stand it anymore, so I bought the Outlander book from Target. (Why couldn’t I wait for the library copy? Hello! An active obsession MUST be fed.) Dang thing is huge! I have never read a book that long. I am used to YA books that are around 300 pages that I can read in one night.

Yes, I typically read a single book in a 24hr period. Even if a book isn’t wonderful, I still must press on and find out how it ends. I think I only got 2 hours of sleep when Breaking Dawn came out before finishing it. (Especially when I hit the vampire baby part. Damn.)

I started the book, but couldn’t stop reading it. Historical romance isn’t really my thing, I will be honest. Descriptions of how to make medicines from herbs and put your corset on where keeping me from the parts with Claire and Jamie together that really made the book buzz. So I kept skipping ahead to the parts where together and “together”.

After spending all day Monday reading and not getting a lick of anything done in my house, I had to take drastic measures. On Tuesday, I put the book in the freezer. Not because it was scary, just so that I would quit reading it and get some damn work done! 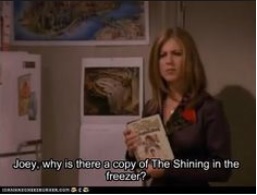 But, well, then the library emailed me and said that the DVD WAS IN!

I stayed up until 2:45AM that night watching the first six episodes. Finished the next two episodes (including WEDDING) on Wednesday. And it was GOOD. I especially love that when they were getting married, she realized she didn’t even know his real name. It was a little slow for the first few episodes. I will admit, adding robots with red eyes to the story to liven it up did occur to me. But in the end, they proved unnecessary. And the dialogue was easier to follow than Pride and Prejudice was. Most likely this was because while the Outlander series takes place a long time ago, it was written by a chick in Arizona in the 20th & 21st centuries.

Now, to see if I can rewatch all the episodes one more time before the DVD is due back. And I hope I finish reading the book before my obsession subsides. (Unfortunately, I never made it through the eBook of Pride & Prejudice before that happened. But that could just be an eBook thing.) I wonder when I will stop talking like a wee Scotsman, aye?

It is going to be a long time before I get to watch Season 1: Volume 2. *Sigh* Do people start crowdfunding campaigns for such things???