This Show is UnREAL

Once again I will review a show that actually premiered almost a year ago. Luckily, in this day and age, I am not the only one who forgoes high cable prices to wait until a show is available by other means.

Today, I bring you UnREAL. My Entertainment Weekly magazine kept talking about this show and it really peaked my curiosity. A scripted drama about both a reality dating show and the shocking events that happen behind the scenes? That sounds pretty good but throw in Shiri Appleby  and Constance Zimmer and I had to add it to my “To Watch” list. You know, the one I keep in my head because if I wrote it down I would lose the paper and I just don’t seem to have 60 seconds to enter it into my Google Keep.

So when I saw that season one of UnREAL was available on Hulu, I decided it was time for my free trail. I timed it out with the purchase of my new phone (with bigger screen and faster service) and the new month on my high speed data.

And, wow. Ignoring all my household duties, I binged all ten episodes in three days. It is TV so good that it sucks your life away and makes it so that you don’t want to eat or sleep or ever do laundry again. But hey, who cares about laundry anyway. Usually I like shows that are predictable and this wasn’t. That made my head hurt, but made for a very engrossing experience. 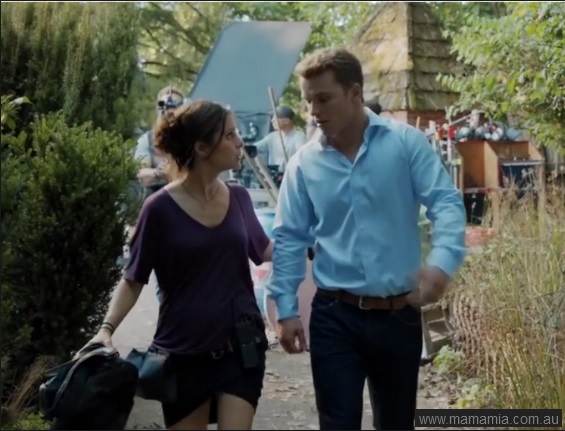 Rachel and Adam during a heated moment.

The reality show within UnREAL is known as “Everlasting.” The bachelor all the women are competing for is a Prince Harry wannabe British manwhore. We learn quickly that all the reality contestants are actually manipulated by the producers to produce the most ratings-worthy television. Sometimes it works out in the network’s favor, and sometimes it backfires. There is even a death of one of the contestants.

I am familiar with Shiri Appleby from Roswell and then Life Unexpected. I liked her well enough on those shows, but she didn’t have much to do on those series but be the damsel in distress or the bitch, respectively. On UnREAL, she gets to stretch her acting chops and I was really impressed with her. The fact that Constance Zimmer can rock any scene she wants to is no surprise to me. I have been a fan of hers since she was on a little sitcom no one but me remembers called Good Morning, Miami. Man, I could write a whole blog post just about that forgotten show. It had a great cast: Zimmer, Mark Feuerstein (Royal Pains), Ashley Williams (How I Met Your Mother), Matt Letscher, Jere Burns, Suzanne Plashette. Zimmer played Penny. She had ALL the best lines. I was totally sucked into a story line where eccentric Penny had eyes for uptight good guy Jake, played by Feuerstein. Not to mention my love of the theme song, “Once in a Lifetime,”sung by Goo-Goo Dolls’ Johnny Rzeznik.

[Thank you Universe for providing TV junkies with a way to revisit their old lost shows. Why does the show American Dreamer jump into my brain now? Shout-outs to Robert Urich, Carol Kane, and Johnny Galecki. You have all gone to better places now.]

Sorry, I was off on another of my blog tangents that makes each post take hours to write.

Usually when I like a show intensely, I like to dress like the characters. I had random mini braids in my hair when I was in college inspired by Rayanne Graff from My So-Called Life. I still haven’t stopped mis-matching my socks like Punky Brewster. But I didn’t have to do that with UnREAL. Rachel actually dresses like me! Which, being that she is such a hot mess and the other characters tell her she looks like a homeless person (which she is, sleeping in the back of the electrical truck), I guess I shouldn’t be happy about. But, I think of myself as dressing like a homeless person most days, so I am on point.  Rachel wears a green cargo jacket over a hoodie, with her hair in a messy ponytail. She stomps around the set with walkie talkie hanging off her ass. I have loved both jobs I have had where I got to play with a “radio” as is the accepted lingo, apparently.

That is another thing I like about this show. I have not-so-secretly always wanted to be a writer for television. Here, I get to see the behind the scenes with the cameras, sets, and what-have-you.  I know I wrote before about Outlander. While the time-travel and romance appealed to me, I could never picture myself IN that show. I don’t want to live in the old-timey days. I could actually picture myself as Rachel, clomping around on the set and eating from the craft services table.

As crazy as “Everlasting” is, the behind the scenes is way crazier. I like Rachel being a hot mess. When we first meet her, we learn that she had a major meltdown on the set the previous year, even destroying sets and stealing a car. She is back, but not trying to rehab her career, she is just trying to make it through each day without losing it and without a drink, which she mostly fails at. But the writers let her make a recovery of sorts so that proposed career opportunities would seem realistic.

You are never sure who is lying. Actually, they all are at some point. I alternately loved and hated the characters: the same characters, depending on that they were up to that week. UnREAL even weaved its way into my dreams; that is a mark of great television. Oh, and I forgot to mention that there is swearing and sex as well. I love those. During the season I changed teams on what man I thought Rachel should end up with. Season one was pretty perfect. I think the creators of UnREAL have only set themselves up for a second season slump. But I will eagerly check it out when I can and hope they prove me wrong.

For those of you with real cable, you can check out new episodes of UnREAL on June 6th at 10pm. That’s on Lifetime.

Yes, I saved that for last. I didn’t want you to get preconceived notions about it based on its network. The network known for cheesy woman-centric movies has really stepped out of their comfort zone with this show. UnREAL has strong woman kicking some ass in a plot that won’t bore you into taking a Sunday afternoon nap.

Comments Off on This Show is UnREAL