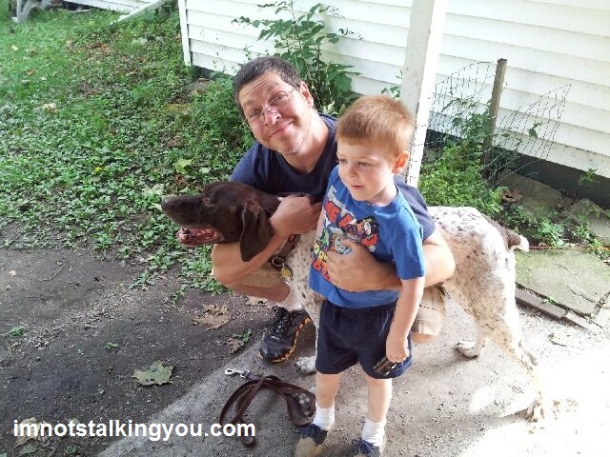 The last known picture of Parker.

Parker Jo Buhdoo was a German Shorthaired Pointer picked up as a stray.  My husband and I found him at the Lenawee Humane Society, then going by the name of Archer.  My husband was very interested in owning a purebred sporting dog.  I looked at him skeptically and  replied, “You want THAT dog?!”

That is pretty much how our relationship with Parker went. 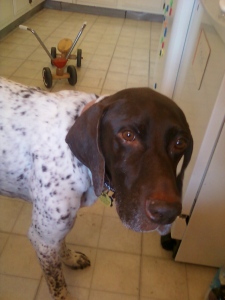 Parker, thinking about asking to go out to poo

Parker could easily hold his urine for 8 hours in a stretch if no one was home.  If you were home, it was a different story.  He would whine and pace about every 2 hours to be let outside.  If he just drank the entire bowl of water, then he would need to go out again in 20 minutes.  If it was getting close to dinner time, he wanted to go out every 10 minutes in hopes of being fed when he was let back in.  If you called his bluff and refused to let him out, he would pee on the floor.  He once peed on our mattress right in front of me just because he was mad.  He peed on the floor probably at least once every two weeks, but sometimes 3 times in one day, for most of the  years we owned him.

Parker asking to go outside to pee

He was an asset in a hundred year old house in our drafty bedroom in winter.  My husband and I worked different shifts, but Parker was a great source of heat and a good cuddler.  It was one of the only times he was not pacing the floor and whining.  Although he did occasionally howl in his sleep while dreaming. 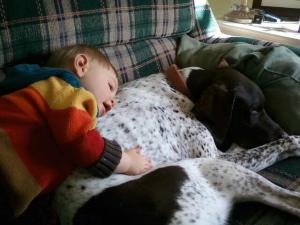 Parker loved to run.  We had a special leash and harness to hook him up to our bikes.  My husband would always take Parker, because he was too fast for me.  He would literally pull the bike.  He would run until his feet bled.  He once did that when he ran away.  He ran away probably about 12 times in the 9 years that we had him.  The best investment we ever made was his dog tag.  The second best was when we extended our backyard fence to include the back door. Once, after a Pure Romance party at my house, he ran away.  My theory is that the products with the pheromones in them turned him on.  He usually ran away on cold, winter nights when it was freezing raining.  Once, on a hot day, he went for a swim in Lake Adrian.  He crossed 223 at least once.  I always expected him to return with a broken leg or worse, but he never did.  We only found him ourselves on one occasion.  We clocked him doing 18mph down the sidewalk.  Luckily, the smell of a nearby baby possum caught his attention long enough to slow him down. 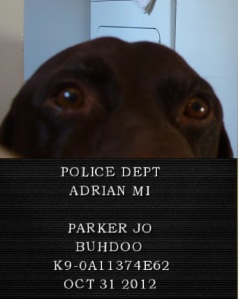 Right when my husband and I were both returning to the workforce after lengthy bouts of unemployment, Parker managed to skewer himself on a metal fence post in our yard.  The vet was concerned that he may have punctured his lung, but he didn’t.  She said he was close to nicking his main leg artery, in which case he would have bled to death before I could have gotten him there.  The vet’s office sewed up the wound twice.  He popped the stitches twice.  We made bi-weekly trips to the vet.  He still went on to fully recover from that wound.

What did I do to myself?!

Parker was so excited to go for a car ride that he was not a very good passenger.  After one incidence where he saw a wild animal and tried to crawl out the window that was rolled halfway down, we learned to only give him a few inches to sniff.

On a family camping vacation to Port Clinton, that bird dog went crazy when he saw an ostrich at the drive thru safari park zoo.

He was such a difficult dog that our best friends could no longer stand to dog sit for him.

Parker was a challenge every day, in every way.

I have a theory that Parker may have been a cat reincarnated as a dog.

Yesterday was our 11 year wedding anniversary. The day started by us saying our first goodbye to one of the furry children of our union, Parker. We think he suffered a stroke a number of months ago, could be going blind, and has exhibited a change in behavior. We had him in our lives for 9 years. I have always hated that dog. Now I hate him for making me cry at his absence.   He was such a challenge to live with in every way. Although, I have to believe that maybe he was sent to us to prepare us for the trails that M, our son, would present to us. Maybe Parker was the opening act. 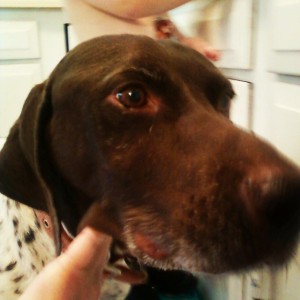 It was so hard yesterday, to pet Parker knowing it was the last time. Knowing we would never feel his velvety brown head again, or his short hair, that was course when it was dirty and soft when it was clean. I am sure I will continue to find it stabbing me in the cups of my bras though. It was easier yesterday when he was gone. But then harder again this morning. Yesterday he was still in our lives, that stupid, miserable dog. Today will be our first full day without him in our home. I am sad that it seems empty. But I am comforted in my belief that no other family would have put up with his whining and peeing on the floor consistently for 9 years. And it is a much more peaceful and calm atmosphere already, without having to fight with the Parker over everything.

We always theorized that he was previously owned by an elderly couple.  He liked older people, and people in wheelchairs.  He hated thunderstorms, and always sought refuge in the bathroom.  We thought maybe the old couple kept him in the bathroom a lot.  We figured one person died, the other would go off to the nursing home.  Then the kids would come and just open the door, and Parker would run.  Because that is what he did best.  Always.  Even with stitches in his leg.  Then they wouldn’t have to try to find him a new home. 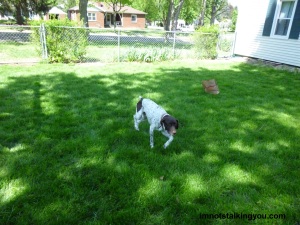 Rest in Peace, Parker.  You definitely made yourself an unforgettable part of our lives, and our family.