RSS Feed
← AAT
I Love Cheap Jewelry, But It Doesn’t Love Me →

I have beginner’s luck. I may have first realized this while bowling.

I make it a policy never to throw warm-up balls when I bowl, because all the throws after that will be worse. So I save those for my first few frames that count. It works every time. I always have a better score in my first game, than any game that follows.

My son turned two recently. We were to have a Thomas & Friends-themed party. I was counting on this to be the case with cake-making as well. I think I assumed correctly.

I have never made a layered, sculpted, shaped, character cake or used fondant before. May I present to you, the most elaborate birthday cake I have ever made in my life. 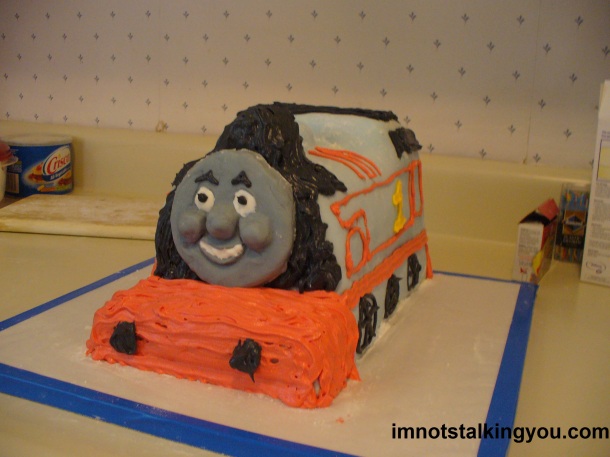 Once I came up with this idea in my head, I just knew that a flat sheet cake with a Thomas picture or toy on it just wasn’t going to do. I must give credit where it is due. I would never have attempted this if I had not found a great Thomas tutorial online by Wendy Lindsey at http://thomasthetankenginecake.blogspot.com/ .

I did make some deviations from her directions, mostly due to budget constraints. Then I was dead-set on using fondant, so I probably spent any money I saved on that:P

This is what I used for my recipe:

I highly recommend if you are going to make this cake to study Wendy’s 14 pages of highly detailed directions and tips. What follows is my experience and deviations from her great work!  All measurements given in inches. (Click any picture to see it larger.)

This is what I based my cake off of. Thomas is a little different in every toy, so that can drive a person nuts.

This is Thomas’ face made out of fondant. Make it at least 4 days ahead of time so it has time to dry.

First I made Thomas’ face out of fondant. I didn’t want to have to color my fondant to be blue later (which would have been impossible anyway), so I only purchased blue fondant. I knew that after adding black, the face would look gray and not blue. I was sure to put the stick in before the face dried. Because I was being cheap and didn’t buy any white fondant, I finished the eyes, mouth, and pupils later with buttercream icing. I made the face on Tuesday for a Saturday party. 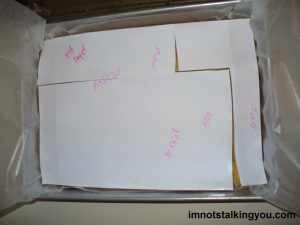 I don’t have a sheet cake pan, so I baked two 9″X13″ cakes. I created paper patterns ahead of time to visualize how I would stack my four layers. I used these patterns to score the cakes before I put them into the freezer, wrapping them in wax paper, then covering with several layers of foil. I baked and froze the cakes on Wednesday for a Saturday party.

On Friday, I prepped my cake board. I taped three 14″X14″ boards together, covering the top with wax paper for easy removal of stray frosting and crumbs later. I lined the edge with blue electrical tape because, well, that is what I had in the house.

Then I removed the frozen cakes from the freezer and assembled them according to my pattern. Using two 9″X13″ cakes did not leave me very many scraps to work with. But you will see I did have enough to make a funnel and steam dome. These are fragile, small pieces. Note that I made my third layer out of two long pieces of cake. It would have been more stable if that layer had all been one piece.

My kitchen floor slants downhill, therefore my oven does as well.  I was too cheap to buy a cake leveler, but now I see that a cake that is more level will yield a better result (and be easier to stack).

Then I covered the whole cake with the buttercream icing, to form a crumb coat.

I used Wilton pre-made rolled fondant. I have no idea if it was good or not because Wilton codes their expiration dates. (If someone knows the decoding secret, please let me know. Thanks.) I bought them at Hobby Lobby. Never having used fondant before, I have no idea if it was the right consistency, but it seemed very stiff to me and I didn’t know what to add to fix that. At this point I was glad I bought the fondant pre-colored, as there is no way I could have kneaded it enough to have ever added my own color. I almost sprained something trying to roll it out with the rolling pin. Even then, it was still a little thicker than the 1/4″ inch thickness it was supposed to be. I wished I had one of those rolling machines that the Cake Boss uses.

Because the fondant was so thick, it cracked when I put it on my cake. A LOT. I made many patches using Crisco and powdered sugar and additional fondant, which actually turned out REALLY well. I was afraid of losing my funnel and steam dome putting on the fondant. If you just frosted a cake, I don’t think they would cause any problem. If I had modeling chocolate like the Cake Boss, I think that would have been a better solution for my fondant-covered cake.

And here is the result…

Fondant covered cake. After it set up for a few hours, I used a paint brush to dust off the excess powdered sugar.

It wasn’t as smooth as the Cake Boss, but I think damn good for a first try!

At this point it was late and I was tired. I was unsure then (and still am unsure) what I was supposed to do with the cake once it was covered in fondant. I put it in the fridge uncovered overnight, and then took it out in the morning to finish the decorating. (If that was wrong, someone let me know.)

Side details with colored buttercream icing

This is where I was glad that I had an extra box of buttercream icing mix. I probably could have gotten by with only using two, but one of them I mixed too thin, and there is no way I could have used it for the fine detail of decorating. (And be sure to leave out your margarine or butter to soften ahead of time! That almost bit me in the ass at the last minute.)

I just decided what details were important to me to include and which weren’t. I actually put in more than I had planned. Being budget conscious and lazy, I also tried to control the amount of colors I needed to use. I only decorated with black, red, and yellow. The wheels on the toys I have are actually blue, but I liked the ones on the cake as black (and I didn’t have to mix up any blue!).

I was too cheap to buy piping bags & tips, so I used my mom’s ancient aluminum cake decorating kit that I last saw her use in 1982.  The frosting holding part of the tool blocked my vision sometimes, so that is why some details are a little messy.  (Yes, that is my excuse.) 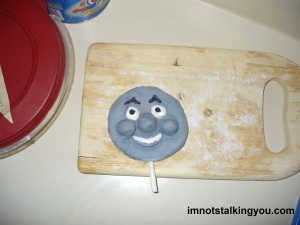 The face, with white and black buttercream icing added

Here is the face, with the eyes, eyebrows and mouth filled in with icing. The face really does make the cake. Mine almost came out too big, so that should be a caution to the next person who tries to make this. When the lollipop stick got trimmed, it got cut too short. It is important that the bottom of the lollipop stick touch the cake board, so that it can support the weight of the face. (I didn’t fully understand this until I reached this step.) I ended up cutting another small piece of stick and taping it to the too short face stick with white electrical tape. (I LOVE electrical tape!)

I was afraid to put the face on because I thought the weight of it would make it fall forward into the red frosting. I didn’t buy any piping gel (which I was supposed to use to stick on the face), so I just used buttercream frosting instead. It stayed on just fine! 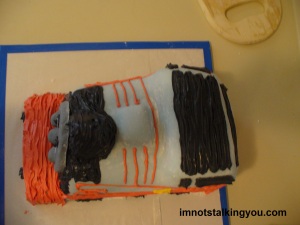 Back view showing the roof, the coal, and the rear light

Here is the finished cake. It ended up being approximately 10.5″ long by 5″ wide by 6″ tall. The face is approximately 3.5″ across.

Finished product next to the toys I used as a guide

Here is Thomas after the party…

The fondant was kind of chewy. As I have never had it before, I am unsure if that was due to the age of the fondant, not enough kneading, too thick, improper storage, or if that is just normal.

After we cut off the rear, I realized that by turning it upside down, it looks like a Teenage Mutant Ninja Turtle! 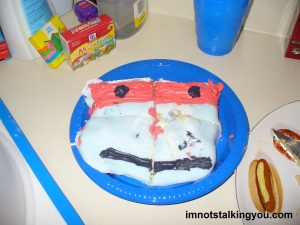 So, I guess if you want a Ninja Turtle cake, just turn Thomas upside down. Hahaha.

It was a lot of work, but I think it was worth it to prove to myself that I could indeed do it.

Unfortunately, this all made me have lots of anxiety and I had trouble eating or sleeping the last two days of cake making and party preparation. Every year, I ask my husband if he wants to have a birthday party for my son. He says yes. I tell him he will have to do all the work. And then I make all the food and clean the house and drive myself crazy trying to make it all as seamless as a television sitcom.

It is stressful trying to live by television standards in the real world. Thank God for my beginner’s luck.

Anyone else out there gotten in over their heads with a birthday cake?