(Make that Two Degrees…see below)

I have loved Matthew Perry since he was on Growing Pains in Season Four. (My love of Growing Pains? We will save that for a blog all its own.) Matthew Perry was in a three episode arc as Carol’s college boyfriend. This caused issues as she lied to him and her parents, as she was still herself in high school. Matthew Perry’s role as Sandy (bad character name) came to a heartbreaking end when he was drunk driving and died. (Sniff, sniff.)

I cannot wait until they release Season Four of Growing Pains so that I may possess these episodes! When that will be, if ever? Who knows. Matthew Perry (can I just call him Matt? *sigh*) was 20 when he did these episodes. He was cute and funny and goofy and endearing and awkward and, well, Chandler. Although no one watching the episodes knew that yet.

Then I watched Matt in the short-lived sitcom Sydney, where he played Valerie Bertinelli’s younger brother, who was a police officer. I like Valerie Bertinelli and, of course, Matt, and would have continued to watch the show, but it was cancelled. 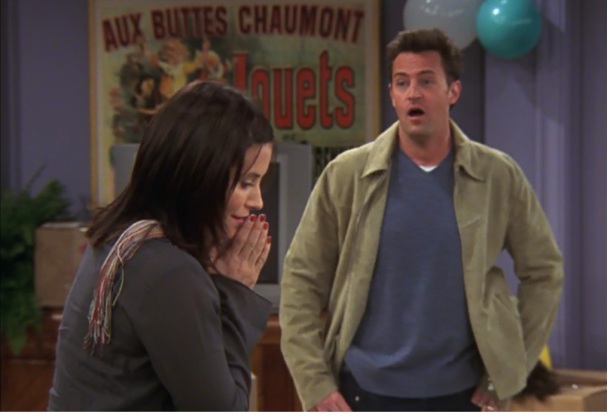 My favorite shot of Chandler from the Friends series finale
Photo: Warner Bros.

Then along came the greatest role ever. CHANDLER BING. Chandler Bing is like my perfect man. I fall in love with a sense of humor and goofiness above all else. He was also very good looking when Friends began. Some of my favorite Chandler moments are when he is trying to woo Monica. It is possible that I am not actually in love with Matthew Perry, but the character of Chandler. I guess I hope that since every early role I ever saw of Matthew Perry was Chandler-like, that maybe that is how he is in real life.

FRIENDS
Rachel’s Boss: So, what’s wrong with him?
Rachel: Nothing. He’s just goofy like that. I actually hardly notice it anymore.

I also like Matt in Fools Rush In. But then again, it is just a variation on Chandler. Just like Three to Tango. And The Whole Nine Yards. And The Whole Ten Yards.

As the years have gone on, poor Matt hasn’t aged well. Some of his boyish good looks have slipped away. It frustrates me that he has tried to take on more serious roles, such as West Wing, Studio 60 on the Sunset Strip, and Mr. Sunshine. I am not drawn to these more serious roles. I know it is terrible, but I would like to see him as Chandler. Forever. You could just put Chandler in a new setting with new co-stars. You could just keep doing that every time the show got cancelled. And I would tune in, every time. As long as the theme song is never “It’s a Wonderful World” by Louis Armstrong.

FRIENDS
Joey: I’m Chandler. Could I BE wearing any more clothes?!

The one more serious role I love Matt in is The Ron Clark Story. It is a TV movie about a charismatic young teacher who makes a difference in a very bad school in a bad inner city neighborhood in one of those big cities with lots of crime, probably New York City. Matt is great in it. I forget that he played Chandler. I forget to wish that he was Chandler again. He is charismatic and funny and great. He makes me believe he could be a teacher, and a good one. Too bad that if you watch the extras, the real Ron Clark is way dorkier and younger than Matt who is playing the role.

My previous job was at the corporate office of a now defunct major bookstore chain. Musicians and celebrities used to come in to meet the buyers of their latest record or book to promote it. It was a wonderful perk to a job that I otherwise mostly didn’t enjoy for most of the 12 years I worked there.

One day Robin Thicke came in to work to perform. It must have been to promote his debut album. I thought it was terrible. But since he has become a huge success (including a part on the new show Duets), I will chalk it up to that he just doesn’t perform the kind of music that I personally like.

FRIENDS
Chandler: Don’t go! I’ve scared you! I’ve said too much! I’m hopeless and awkward and desperate for love!

Now, I have mental rules about playing “six degrees”, due to the fact that I have seen so many celebrities. Usually I only count them if I actually spoke to them (such as Bruce Campbell, Jason Mraz, Ricky Skaggs, Jamie Lee Curtis, etc.). But I make an exception for Robin Thicke. I didn’t meet him that day because I thought he was icky. But I could have met him. And I sat in like the second row for his performance. And the whole time I sat there, I just kept thinking “Oh My God. This guy is the son of Alan Thicke who was on Growing Pains and so was Matthew Perry. I am three degrees away from Matthew Perry!”

NOTE: If it was actually Noah Wyle (E.R.) that I saw at Detroit Metro Airport in a Warner Brothers T-shirt getting on a plane to Los Angeles in September of 1996, then that would make me only two degrees away from Matthew Perry, as Noah was once in an episode of Friends! But this would again break my rule of having to have talked to the celebrity, because I didn’t talk to the “maybe Noah”.

ANOTHER NOTE: I am only two degrees away from Kevin Bacon, as he came to my old job and performed with his music group “The Bacon Brothers”. While I stalked the conference room, I didn’t get to go in or see him. But many of the people I worked with, in the same department as me, did:)

So, to wrap up, I just watched a teaser for Matt’s new comedy series this fall called “Go On”. In the 3:19 teaser I watched, it looked like it had potential. But the plot of the whole series is that Matt’s character is in therapy because his wife died. I realize actors like to stretch their boundaries and not be typecast into the same character over and over again. But I have to believe most of his fan base out there is like me. We want to see Chandler again. And we don’t want a sad Chandler. That makes me so sad I want to cry, not watch his show!