My family was lucky enough to get a chance to escape up to northern Michigan this summer. This gave me the opportunity to introduce my son to the land of dinosaurs, better known as Dinosaur Gardens.

You see, I visited there when I was only a little older than he. And I not only lived to tell the tale, but I left with proof.

I didn’t tell my 4 1/2 year old son where we were heading. I had visited the Dinosaur Gardens website, but I was still afraid that maybe they would be closed or something. Then, of course, he was asleep when we arrived. I groggily took him out of the car and, holding him lovingly to me, said, “Hey, look what is over there in the woods!” and pointed out the giant brontosaurus to him.

An immediate look of horror crossed his face. This is a little boy who actually likes scary things. (And making up stories. I am planning on him to be the next Stephen King.) But, well, apparently he doesn’t like them when he first wakes up.

We took him into the gift shop, where the sight of toy dinosaurs quickly woke him up.

But when we began down the path into the woods, M wouldn’t budge. He was afraid of the brontosaurus. Mind you, it did tower over even mom and dad, let alone him. With some gentle but firm coaxing, he entered the forest. But first he said, “This is very weird and ridiculous.” 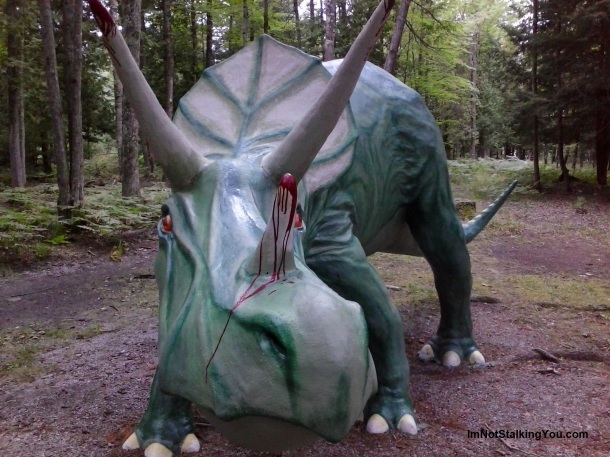 I can’t imagine why he could be scared…

In time he became so comfortable, he even began to feed the creatures himself! 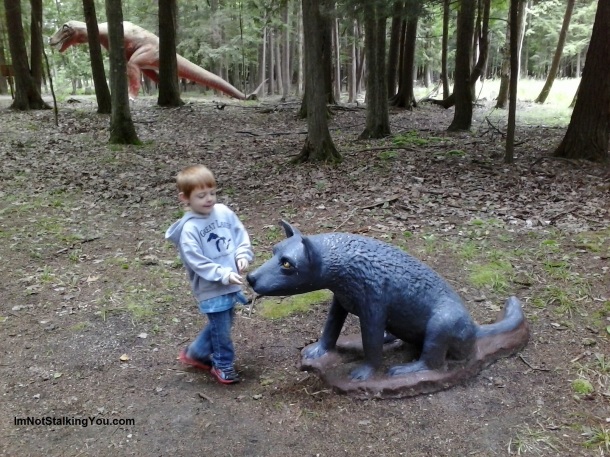 M feeding one of the animals.

I had told my husband that my mom had brought me here 30 years ago. He asked me how she knew about it. My mother’s grandmother had a newspaper clipping she had saved about the extraordinary sculptures someone had made in Osseneke, Michigan. So, they had brought my mom (and most likely her older brother) up here once when she was a girl. I love that this roadside attraction, many of which thrived in the days of drive-ins in the 1950s but have since become extinct, continues to roar on for generations of my family.

Even my husband was charmed.

I asked my son if he would bring his kids back to visit. He said that he would, and that I could come too.

I think it is amazing that this tourist attraction has survived for 80 years. And not only been maintained, but improved! There were two new exhibits that had been added in recent years. While we were there, we saw several concrete statues that had either been recently repainted, or had had their previous paint carefully removed and were primed for a new coat.

This was the only sick animal, and I thought it was very clever how they explained his illness. 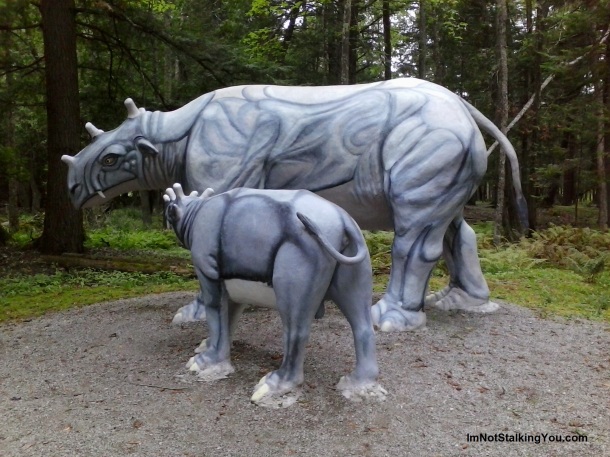 I love that all this was created from one man’s imagination gone wild. He stood on this piece of land and saw that the fabric of time was thin here, that others would be able to come after him and experience prehistoric times as he could, with a little help from his own hands. I love that he had a dream that most would call crazy, to build dinosaurs in northern Michigan’s harsh climate. But he did it. And it has endured for nearly a century.

Yes, I had to recreate the past.

That is all I am asking out of my writing career. That isn’t too much to ask for, right?

Follow the romantic entanglements of The Riley Sisters in my books:
The Wind Could Blow a Bug – AVAILABLE NOW!
When You Least Expect It – NEW RELEASE!

Comments Off on Dinosaur Gardens

The Bounty of My Garden

Most people garden and grow a plentiful bounty of vegetables that make their way onto their dinner tables and into their stomachs.

Our garden? Eh, not so much.

Gourd collection on the front steps

We got gourds. Lots of ’em. And they are large too. I, personally, don’t know anyone who eats a gourd. But they are pretty. And it saves us money on Halloween decorations. Did I mention we have a few small white pumpkins as well?

This started last fall. After Halloween last year, when the decorative fruit started to get squishy, my husband threw our white pumpkins and gourds into the corner of the backyard we call our garden.

We call it the garden, but no matter how many times he rototills the ground, grass insists on growing there. Which is super humorous, because we can’t get grass to grow in the rest of our yard at all!

This spring my husband planted sweet corn. But, surprisingly, the gourds came up as well. My husband almost mowed off the vines, but I knew what they were from having unsuccessfully tried to grow pumpkins year after year growing up. 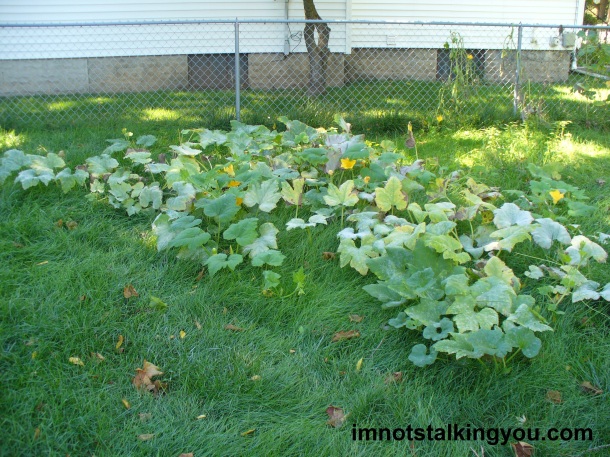 So, the corn grew and the gourds grew. We called it my husband’s garden and I left it up to him to care for it. But as it became clear that we are in a drought, I took pity and watered it when I remembered to. He forgot to thin out the corn. And he forgot to harvest it, or rather, kept waiting for the ears to get bigger. (They never did.)

We started harvesting the fruits of our labor last month. We got most of them to shelter before a freak hailstorm hit. Only a few were damaged. What do you do with a butt-ton of gourds? A few years ago when we grew them (similar seeding process), we tried to sell them. (I think my mother-in-law may have been the only customer, bless her heart.) This year I gave a couple to my mom. The rest, well, we will use them to decorate.

And re-seed for next year.

Now, to get rid of those corn stalks. Ooo! Maybe I could get my husband to bundle them up for decoration as well!

Yes, we have a very bountiful garden. What do we grow? Oh, exterior harvest decorations, of course!

Posted in A day in the life and tagged corn, decoration, funny, garden, gardening, gourd, harvest, humor, pumpkin, white. Bookmark the permalink.
%d bloggers like this: