There’s Definitely [Not] Something Wrong with Me. 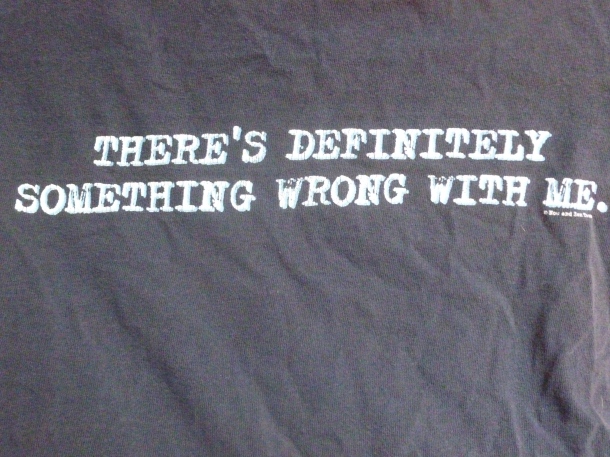 I bought this shirt years ago. I bought it at Media Play. They went out of business in 2006.

I saw this T-shirt in one of those clear plastic squares up on the wall. I searched and searched the rack below, but they did not have anymore. The last one was pressed into that display box. So, I did something very uncharacteristic of me. I actually went and ASKED AN ASSOCIATE to get it out so that I could buy it. It was a size way too big when I was actually beginning to eliminate some of my too large 80s shirts from my wardrobe. But I didn’t care. I HAD TO HAVE THAT SHIRT.

I wore it quite a bit over the years. More recently, I relegated it to being a sleep shirt mostly because it was such a large size that it was hard to layer under a long-sleeved shirt and a hoodie in the winter months. I count winter as September through May. (Yes, three layers, minimum. I will need to retire somewhere warmer and sunnier than Michigan.)

I intended to write a blog post about this shirt for a long time. The date of June 9, 2014 is on this photo in my computer. Although, for all I know, that could just be the last time I replaced my hard drive. I initially intended to write about how made-for-me it was, how true the statement was.

But something has happened to me recently. I don’t always think the same way I used to. And, well, I can’t write that post anymore.

Last year, about this time, a saying popped up in my head:

And while I contemplated getting that tattooed on my wrist for a short time, I don’t think it is entirely accurate either.

Because while others think I’m weird, weirdness IS my normal.

Maybe it is everyone else (those who judge me) who have something wrong with them.

So now, I have moved on to:

Don’t write me nasty comments. This is just a pen & ink illustration, NOT an actual tattoo.

The symbols of a heart and an arrow, which to me represent “Love Yourself.” You may have even seen me use such a picture with the saying on a previous edition of my blog or a tweet. This is the latest tattoo I am contemplating, this time for the inside of my forearm. I would love it to be a daily reminder to do just that. But, alas, life is a very mental game and outside stimuli are very bad at reminding me of who I need to strive to be.

Being positive remains a daily battle.

I just have to remind myself that if I lose today, maybe I can still win tomorrow.

Posted in A day in the life and tagged attitude, embrace your weirdness, law of attraction, Love Yourself, Media Play, personality, positive, self, self-esteem, Tshirt, wrong. Bookmark the permalink.
← F*ck Ya, That’s My Dream
Just a Reminder →