RSS Feed
← Paint It Like It’s 1988: DIY Child’s Coat Rack
There’s Definitely [Not] Something Wrong with Me. →

F*ck Ya, That’s My Dream

Ever since I was a little girl watching Laverne & Shirley and Punky Brewster, I have wanted to be a sitcom writer. I knew I could never be an actor, for various anxiety-related reasons. But the actors don’t choose (in most cases) what comes out of their mouths anyway. That is controlled by the writers. So, that is what I wanted to be.

I never really believed that that dream could come true. Recently, I have thought, “What the hell. I am going to believe that it could be a possibility. And things like when The Mindy Project began following me on Twitter for no apparent reason get my hopes up. What if they realize my genius?

I was losing faith that there would still be shows like that for me to write these days. In recent years, everything became a “reality” show (although I believe that they actually have writers too. Really real, right?) Now everything is a serialized horror anthology. Not my style at all.

But then there is The Ranch on Netflix. It restores my faith in the half hour comedy with a little-drama-thrown-in-to-grow-the-characters format. Plus there are LOTS of swear words, which the 12-year-old boy that lives inside of me loves.

The premise is that professional football player Colt (Ashton Kutcher) returns home to the ranch to live and work with his goofy brother Rooster (Danny Masterson) and their grumpy father Beau (Sam Elliott). They spend lots of time with their hands up cows’ asses, and the rest of the time drinking. All the dialogue is very easy going and it just feels like Ashton and Danny showed up to hang out for the day. Ashton even looks like he might just wear his clothes from home. Then maybe Sam Elliott is just grumpy because he came in expecting to actually make a real TV show, although he seems in on it as well. It just seems like something I would love to be a part of. 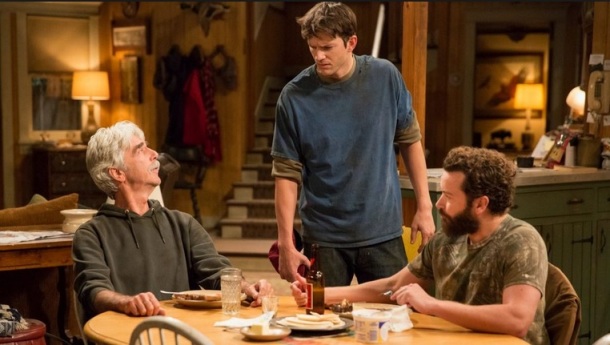 One of the few occasions where Ashton Kutcher is not wearing a baseball hat.
Photo: Netflix

In the episode I watched today, the sexy weather girl Tanya Showers was giving the lottery results on the Bennetts’ television. All the men were hypnotized by her. “First reading the weather, now the numbers. Is there anything she can’t do?” My brain jumped ahead to the punchline before they got there. Maybe everyone’s would, but I like to think I have a talent for it. I relish the predictability.

But then the cliffhanger at the end of part (season?) two totally surprised me. I was actually mad at myself for not predicting it, because they did foreshadow it in the preceding episodes. But it was still good.

Comments Off on F*ck Ya, That’s My Dream