New Mix CD: What The Hell?!

Having a long commute to work again, it takes no time at all for me to compile a list of songs that I try to search the radio dial for, and them am disappointed when I can’t find them.

Then I give up and make a mix CD of them all. I don’t have a car radio with an mp3 input hole or iPod that has a screen/playlists. So, I must burn CDs, like some sort of primitive late 90’s animal.

I think I am going through a mid-life crisis. And Avril Lavigne has a new album coming out. This CD reflects all that.

Warning for sensitive eyes: I buy and quote the explicit versions of all the songs.  And all the best parts are the ones with the swear words.

I have included the iTunes genres so you can see how schizophrenic my musical tastes are. And so that you may laugh at Apple’s classifications.

And that is why they call it a MIX TAPE
Photo: gokwala.com

1. Counting Stars-One Republic POP
This is one of those songs that I never noticed until I found myself singing along to it on the radio one day. It rocks, but there is a sound effect in the background that sounds just like my Pointer whining. That bothers me a little.
“Lately I been, I been losing sleep
Dreaming about the things that we could be
But baby, I been, I been prayin’ hard
Said no more counting dollars
We’ll be counting stars
Yeah, we’ll be counting stars”*

3. Over My Head-Richard Marx POP
The local radio station that will play ANYTHING plays this all the time, even though it is from 2012. I bought it because I liked it, I thought it would be funny to put next to The Fray song of the same name, and I feel a little sorry for Richard Marx. Although he probably has more money than I ever will have, so he is probably doing just fine. My crazy friend and my green-haired friend and her brother all went to see Richard Marx once at an outdoor venue in the summer. On the big screen that was broadcasting his performance, I watched a bug fly in his mouth mid-song. He never missed a beat or hit a wrong note. He didn’t spit until the song was over. It really impressed me. He is a class act.

4. The a Team-Ed Sheeran SINGER/SONGWRITER
This is has terribly depressing subject matter, but it is catchy and gets stuck in my head.
“It’s too cold outside
For angels to fly”

5. Speak Life-tobyMac CHRISTIAN
I don’t know why I like tobyMac, I just do. This song is very upbeat and dancey, just like “Steal My Show”, the only other song by him that I know.
“So speak Life, speak Life.
To the deadest darkest night.
Speak life, speak Life.
When the sun won’t shine and you don’t know why.”

6. We Can’t Stop-Miley Cyrus POP
I have liked Miley since her Hannah Montana days. I think her recent stunts that have attracted publicity are doing just what they were designed to do: ATTRACT PUBLICITY! I think she is a really good singer, although this song doesn’t fully showcase that. Who knew something so cool would come from the guy who cursed us with “Achy Breaky Heart”.
“It’s our party we can do what we want to
It’s our house we can love who we want to
It’s our song we can sing if we want to
It’s my mouth I can say what I want to”

7. Wrecking Ball-Eli Lieb POP
I like Miley’s version, but this guy really rocks it.
“Don’t you ever say I just walked away
I will always want you”

8. Girls Just Want to Have Fun-Cyndi Lauper POP
I heard this song on the way to work this week and it actually made me cry. I am going to blame it on the onset of Seasonal Affective Disorder. But some of the lyrics really are deep.
“Some boys take a beautiful girl
And hide her away from the rest of the world
I want to be the one to walk in the sun
Oh girls they want to have fun” 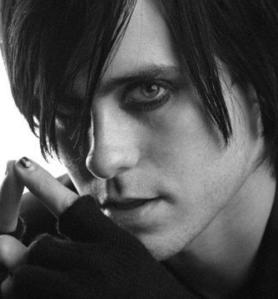 Jared Leto of 30 Seconds to Mars

10. City of Angels-30 Seconds to Mars ALTERNATIVE
Every time this song comes on the radio, I change it, because the beginning is just so slow. But I love the emotion in the song. The lyrics say “strangers”, but Jared actually sings it like “strangels”. I want to be a strangel for Halloween. Sort of like a strange angel? I could just wear my normal clothes and mismatched socks, and slap on a pair of wings. I have black wings. That would make me more stranger.
“Lost in the city of angels
Down in the comfort of strangers
I found myself in the fire burnt hills
In the land of a billion lights”

11. What the Hell-Avril Lavigne POP
The namesake for this whole CD. I totally love Avril, and I have all her albums. Well, I did, except somehow I missed when “Goodbye Lullabye” came out. I am guessing that was because I was busy with my son’s doctor appointments and trying to find a job. I wasn’t listening to much radio. But my collection is now up-to-date. I would BE Avril if I could.
“All my life I’ve been good but now
I’m thinking ‘What the hell?'”

12. Smile-Avril Lavigne POP
It has a cute music video.

13. Rock N Roll-Avril Lavigne POP
It has a cute music video with Bear-Sharks. And the song rocks!
“I don’t care if I’m a misfit
I like it better than the hipster bullshit
I am the motherfucking princess
You still love me”

14. Undead-Hollywood Undead ROCK
I love Rap/Rock and I was very sad when it went out of style. Kid Rock, Limp Bizkit, Linkin Park–I loved them all. I am happy that Hollywood Undead seems to be bringing it back.
“You better get up out the way,
Tomorrow we’ll rise so let’s fight today,
You know, I don’t give a fuck what you think or say,
‘Cause we’ll rock this whole place anyway.”

16. 4 Real-Avril Lavigne POP
I needed more songs on the CD.

18. Goodbye-Avril Lavigne POP
A very powerful song, but kinda slow for my taste.

*All lyrics belong to their respective writers. I am sorry to say I am not that talented.

Comments Off on New Mix CD: What The Hell?!