This week I learned that my asbestos friend was writing a post about an issue dear to her heart. This made me realize that maybe I should do the same as well. I believe our veterans (of all branches) are the truest heroes that we have in our nation. I took this opportunity to finally get out my credit card and donate to Honor Flight Network, which has been on my to do list for years.

Honor Flight Network (which can be found at www.honorflight.org) “is a non-profit organization created solely to honor America’s veterans for all their sacrifices. We transport our heroes to Washington, D.C. to visit and reflect at their memorials. Top priority is given to the senior veterans – World War II survivors, along with those other veterans who may be terminally ill.”

You might think that your donation just goes to cover the cost of a plane ticket. But priority is given to the veterans in the worst physical shape, as they literally may not live long enough to catch the next Honor Flight. Your money goes to purchase everything for these veterans while on their trip, including food, wheel-chair assessable transportation, oxygen while they are in Washington D.C., and coordinating people to push and assist them to get around.

Have you ever taken your grandma who doesn’t get around so good to Walmart? Ya, it is sort of like that, times a whole airplane full!

But this is a great cause. WWII was the biggest conflict in our recent history. More of these veterans die everyday. Think about it. If they were 18 when Pearl Harbor was bombed, then they would be 90 years old today!

Why didn’t they go visit their memorial sooner, when they were young and spry? Because we didn’t complete it until 2004! The question should really be, what did we wait so long for? (Local Trivia: World War II veteran Roger Durbin introduced the idea to U.S. Representative to start the process. Roger Durbin’s son was an English teacher as my high school.)

Most of all, this is important to me because my dad served in WWII. He was an ambulance driver with the medical corps in Germany. He was there when they liberated a concentration camp. He saw some bad stuff. Sorry I don’t know which camp. I only know what my mother told me. See, my dad died in 1975 of a heart attack. He never got to see his memorial. He never knew that they built one. He never even got to meet me. My mom always said the biggest thing he did in his whole life was his time in the Army. That is why I sort of think of Memorial Day as a family holiday, and I feel closest to him on that day.

So, I will add Honor Flight Network to my “What I Support” page. But not today. I have to head to work in a little bit.

But before I head out, I also learned a little something about pumpkins.

This is a picture of our pumpkin. 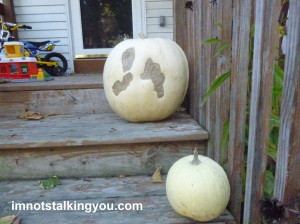 I am really into white pumpkins the last few years. And none of the orange ones fancied us, so we picked out this unusual one that looks like a ghost. If you tilt your head. And squint.

The lady we bought it from at Carpenter Farms (cool place, check it out sometime) asked us, “Do you know what this is?”

We replied, “A ghost pumpkin.” Obviously!

She asked, “I mean, this stuff on the pumpkin, do you know what it is?”

“That is deer damage. We had a lot of deer damage this year,” she explained.

I am not sure I would count it as damage if we still shelled out $3 for the pumpkin!

The great thing is, there is no carving required.

(I have been very leery of pumpkin carving since I required 5 stitches in my hand;)