RUN FOR YOUR LIVES!!!

I live in a small town in Southeastern Michigan called Adrian. While it is small by New York, Chicago, Detroit standards, approximately 44,600 people live here and it is the county seat. So then, you would think, when they make major road construction plans that they would make sure there is still a way in and out of the city that isn’t blocked. 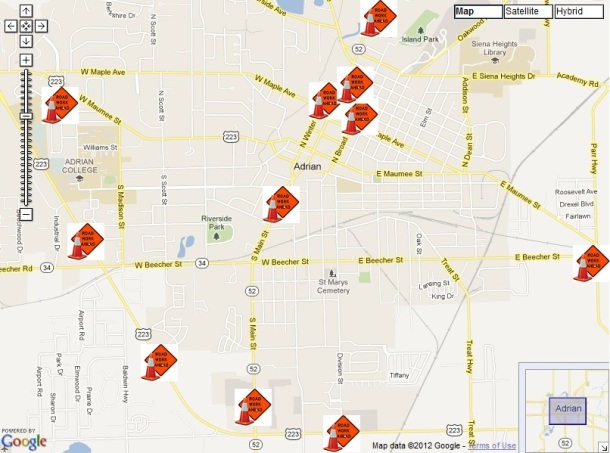 A map of Adrian showing the construction projects of 2012, as compiled by me.

You also have to realize that there are small towns around Adrian that have no Walmart, Meijer, Lowes, or Spotted Cows. Hence, people come from far and wide (Blissfield, Riga, Deerfield, Palmyra) to go to Adrian (when they don’t feel like driving to Toledo or Ann Arbor).

Now, to get to Adrian from the East, you have to cross the River Raisin. The River Raisin is no ordinary river. Ripley’s Believe It or Not deemed it the most crooked river in the world. (Or so they tell students in the local high school science classes.) There are a limited number of bridges to cross the River Raisin from the East. (This is really inconvenient when the river floods and closes several of them.) The main crossing between Blissfield and Adrian and the most convenient is in Palmyra. Which is now a one lane bridge due to construction. It has been since, like, April. No end in the forseeable future. My brother-in-law even contacted the Michigan Department of Transportation via Facebook to ask if they would be finished soon. They only answered that they were on schedule. And that means our grandchildren will have a new bridge?

A map of Lenawee County showing all the 2012 construction projects, that I gathered myself.

Many locals take a road north of the Palmyra bridge construction to get into Adrian. Or they did. Until they started resurfacing that road, going so far as to close it completely some days.

This leaves only a southern detour to get to Blissfield, even involving a stretch of gravel road.

My asbestos friend, in utter frustration trying to reach the grocery store recently, texted me that Adrian must be quarantined, because it was almost impossible to get to it.

I laughed very hard and realized she was totally right. My husband doesn’t get it.

This summer’s construction has been really miserable and it isn’t anywhere near over as they begin new projects every day. IN OCTOBER!!!!!

We have 2 seasons in Michigan–Winter and Construction. Winter is here. It is time for Construction to END!

Comments Off on THE QUARANTINE