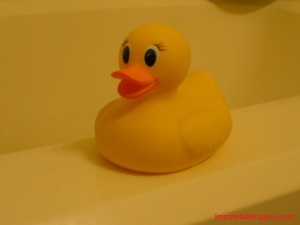 I guess every kid has an issue with something. My son (“M” for the sake of the blogosphere) has an issue with the bathtub. As an adult educated in the laws and reasons of science, I do not understand it. But, I am not 18 months old.

Baths for my son started in the usual way—in a baby bathtub, in the kitchen sink. He hated baths at first. But we just figured that was because he was probably cold. He was only 5 lb. 11 oz. when he was born. And at three weeks old, we realized our furnace had been running inefficiently for some time. Especially because it died and we had to buy a new one.

Once the weather warmed up and our baby fattened up, things started to go better. Throughout the summer and into the fall, we moved him into the big tub. It was a fairly smooth transition.

In November of 2011, M had to get a tube put into his left kidney that went out to an external bag that we had to hang on his back. He had the bag through January of 2012. In that time, we gave him sponge baths. In the living room. My mom thought we should have given them to him in the kitchen sink. I stood by the fact that he was too big for that now, and might rip the faucet off or something. And, truth be told, I liked to watch TV while we bathed him. He got to where he hated this, and would cling to one of us (mom or dad) screaming, while the other (dad or mom) did the best they could to wash him as quickly as possible. (As it was winter again, we chalked it up to that he was probably cold.) Sometimes this ritual would be followed by changing the bandage over his tube site. It wasn’t oozy or anything. We changed it to keep it well covered and keep infection out. But it required much screaming (by my son) and anxiety (from the parents). That may not have helped the situation either.

A week after the tube was removed I was very excited to return him to a more standard bathing routine. I plopped him in the normal tub in about an inch of water and…he screamed his head off and stood up and clutched my shirt as if I was trying to drown him. This went on for what seemed like an eternity. In reality, it was probably only a few months.

I asked the pediatrician what she thought. She hypothesized that he was just so traumatized by having the same major surgery twice and being stuck with needles by strangers, etc. that it was bound to manifest itself in some way. A great idea with probably some truth, but not a help in revolving said situation. I asked for advice from family members. Sister-in-Law suggested I let him play in the tub without water in it. I did. He was fine with that. But somehow, that ease of attitude didn’t translate to being naked in the tub with water.

You are right, this is a big improvement, except HE IS STILL STANDING UP! He holds on to the bathtub edge for support, and it gets all slippery with water and soap. He is leaning down the whole time to watch his foot splashes. With his head hanging over the edge of the tub. One time, early on, as he was doing this, I was sitting in front of him. All of a sudden he had fallen head first out of the tub and done a sort of somersault into my lap. Suddenly I had a wet, slippery baby in my lap. I put him right back in the tub and he was unphased. He went back to stomping his foot and splashing the water.

If I try to sit him down in the tub, he screams. I have bath toys floating around. He might try to step on one with his foot if it floats by, but otherwise he ignores them. Have you ever tried to wash a child’s hair when their head isn’t even inside the tub, but hanging over the edge? I try to rinse it out and I end up with wet knees and a wet bathmat.

I fell like, if we can get over this hump of him sitting down in the bath, we will be caught up to where we should have been by now. If we hadn’t of lost three months to the nephro tube and sponge baths. It does seem as though persistence pays off eventually with him. I know it did with him falling asleep at bedtime. Hmmm…Maybe I could avoid all this by just giving him a shower instead?