Every year my asbestos friend participates in National Novel Writing Month, which is known as NaNoWriMo to people who like to receive strange looks from their friends. My husband began calling it WiNo RhiNo, because he is goofy like that.

But my friend and I have very different writing styles. Even she will tell you that. She writes a big grand story with all the details, then cuts it down to its perfect, beautiful package. I write my first draft lean and mean. Then later I fill it out with descriptions of people and places. 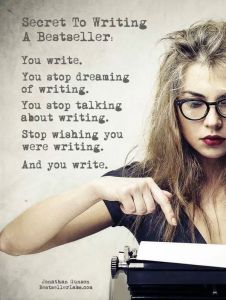 It just happened that I had three stories (Yes, THREE!) vying for my writing time this November. I had never participated before, and this was to be my first year. I really should have been spending time editing Be Careful What You Wish For, but that is what December is for, am I right??? I loved all my in-process stories, but the environment in my home during this competition just drained my motivation. I also saw other people’s word counts (posted on both Facebook and the NaNo website) and I got very discouraged that everyone writes faster and most likely better than me.

Now the goal of NaNoWriMo is to start a brand new story on November 1st, and reach 50,000 words by November 30th. All three of my stories were already started, so I sorta already blew that. And my first drafts never reach 50,000–that comes later.

So I proceeded to work on the last half of what has the working title of Troll Gurl and the Cursed Kingdom. When that was completed, I worked on the last 3/4 of what right now I am calling Emma.

When I wrote the first two books in The Riley Sisters series, it felt like I wrote them each in about two weeks time. (Remember, they were lean, not fattened up for publishing yet.) But since that sounds far-fetched even to me, it was probably about a month a piece for them. So, I was not daunted by NaNo’s tight schedule. I would be just as dedicated with my current story(-ies), right?

Wrong. The Wind Could Blow a Bug and When You Least Expect It I started, and then just wrote them every spare minute of the day until I reached the conclusion.

NaNo had a different effect on me. Their suggestion was that I write 1,667 words per day to reach my goal. So, a lot of times, that is all I wrote, or a smidge more. But then there were about three days (Thanksgiving being one of them, another was when I had a book-signing at Barnes & Noble) where I wrote nothing. That set my project finish date occasionally behind. And time I should have been writing, I blew off because “I have all my words for today!” Then I did things like getting hooked on Netflix’s Jessica Jones. (She calls to me even now. I only have one more episode to watch. Who really needs a blog post anyway???)

Jeri: You need to pull yourself together. You are coming across distinctly paranoid.
Jessica: Everyone keeps saying that. It’s like a conspiracy.
—Marvel’s Jessica Jones, Netflix

I felt ostracized because I prefer to hand-write a first draft. I know, it is allowed and NaNo even tells you how to use a random number generator to validate your work, but I still felt like a second class writer. I came up with an average word count for full pages, mixed with partial dialogue, and all dialogue. And I was careful to always underestimate my number because, you know, in an honor-system-based website I would hate to get accused of cheating. Despite that, my anxiety-ridden frosting-filled body just felt like I was defrauding the system somehow.

At the start of November, I had no idea what terms such as “word sprint” and “virtual write-in” meant. And I still don’t. I didn’t participate in either. NaNo has a spot for “writing buddies,” but I never really saw the point. If I was supposed to get some sort of sense of support from others while doing this, I guess I was cheated on that experience. My asbestos friend and I give each other lots of support while we write. And we are actually able to provide it better if we aren’t both writing for our lives in the exact same month of the year.

I tend to enjoy the struggle to create my own processes to accomplish tasks that others have already found a better way to complete and have been using it for years (ex. quilting, genealogy). Then again, I also desperately wish to belong. I want to do what everyone else is doing. It is the two sick and twisted parts of my brain that fight each other daily. So, I wanted to do NaNoWriMo because all the cool kids were doing it. But, I also wanted to resist because rebelling and writing in every other month EXCEPT November sounds good too.

I reached my 50,000 words, and two days early, I might add. I am torn about whether I would do this event next year or not. On one hand, I like to write my first drafts as clean as possible, and I feel like these were very rushed and not my best work. On the other hand, without this competition, I probably would have put off working on them for a few more months, and then who knows if I would have ever data-dumped them from my brain onto paper or not.

My recommendation is that if you are a person who isn’t good at organizing yourself, participate in NaNoWriMo. If you don’t like time restraints put on your creativity and handle your own time management pretty well, you can skip it.

Follow the romantic entanglements of The Riley Sisters in my books:
The Wind Could Blow a Bug – AVAILABLE NOW!
When You Least Expect It – NEW RELEASE!
Be Careful What You Wish For – COMING JANUARY 2016!

Comments Off on My First WiNo RhiNo