The finished product: Spaghetti Squash with Spaghetti Sauce and Cheese

This week I learned that spaghetti squash is pretty good. My friend cooked some up using a Rachael Ray recipe. I found a recipe of Ms. Ray’s (not sure if it was the same recipe) and bastardized the hell out of it. I really only used the recipe to know how to prepare the squash. For final touches, I just put Ragu spaghetti sauce and an italian shredded four cheese blend on it. My husband liked it. My toddler son LOVED it. I thought it was kind of “eh”. But if it isn’t chocolate-coated, that is often my response.

A satisfied customer (And using a fork! So advanced.)

I also learned this week that I don’t seem to be qualified to work as a part time bank teller. It appealed to me because I thought I would still have some time every week to spend with my son and keep the house clean. I interviewed at two different branches. One went with someone with 20 years of teller experience. (My experience in banking? None.) I can’t compete with that.

I haven’t heard back on the second interview yet, but the job description and the manager made it pretty clear that they wanted someone who spoke Spanish. (Alas, more skills I lack.) The recruiter didn’t seemed as concerned by my lack of this skill. 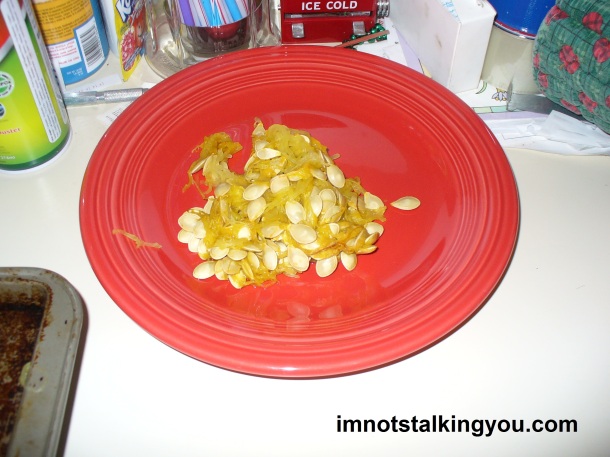 Spaghetti squash have seeds?! But Rachael didn’t say anything about what to do with seeds!