From the Edge of the Deep Green Sea

In high school junior year (1992–please do not do the  math on my age), I had a class called Issues, which was History and English combined.  I know, it sounds strange and it was strange at the time.  Anyway, in that class there was a kid with a T-shirt on with a poem-type thing on the back.  I kept reading it and liked it, so I copied it down.  I then hung it on my bedroom wall for years and memorized it.  Here is the original sheet of paper it was written on. 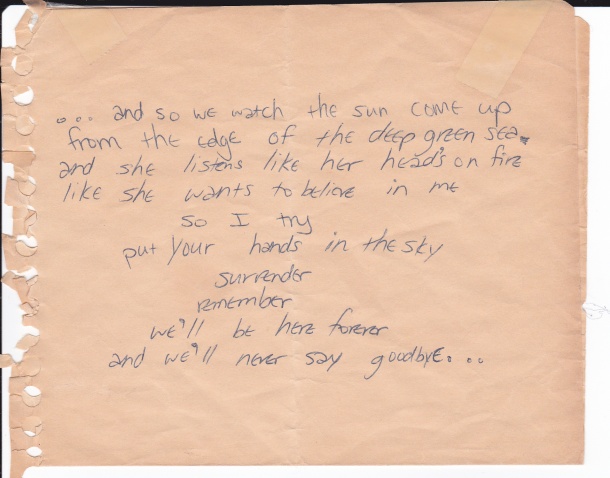 For those whose browsers are picky about pictures, here is the text:

…and so we watch the sun come up
from the edge of the deep green sea
and she listens like her head’s on fire
like she wants to believe in me
so I try
put your hands in the sky
surrender
remember
we’ll be here forever
and we’ll never say goodbye. . .*

For years, these were just words I copied off a guy’s T-shirt. There was a Bon Jovi song that had similar lyrics, but these were clearly not from that song. I figured I would never find out where it came from, and I was kind of OK with that.

When I got sick of the crusty yellowing notebook paper on my wall, I decided to make a plaque with the words on it. (I’m just a lil bit crafty;) I wrote all the lettering with a toothpick dipped in black paint. I was pretty proud of myself. 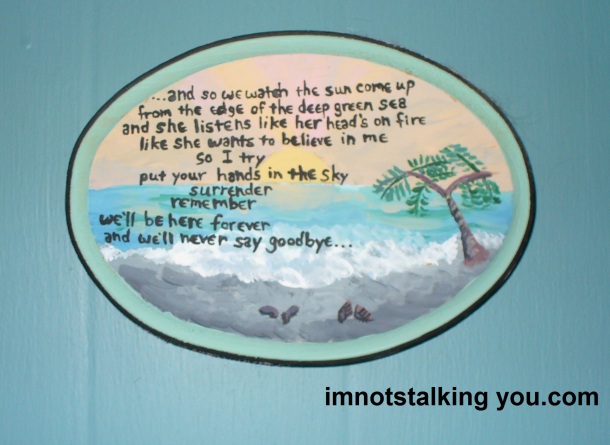 Wooden plaque I made to replace the notebook paper*

Then one day at work (October 25, 2000 to be exact), my green-haired friend sent me an email with a Mad Libs type story, using the word “GREEN” and the phrase “THE DEEP DARK SEA” in it. So I typed up my “and so I watch the sun come up…” words to her and hit send.

GHF: whoah that was weird!!!!! you have totally stunned me into silence…. how did you know?

ME: know what?
I got that off some guy’s shirt in high school
I have no idea what it is from–do you?
I memorized it, and I painted it on a wooden plaque:)

GHF: it’s a cure song silly i think you know more than you say

GHF: That’s me and [S]’s favorite song (lyric-wise) called…. “from the edge of the deep green sea” It’s the song that brought us together. he he

ME: That is just too freaky–is that why that one site is called “deep green sea” whoa, it is all falling together:)

GHF: YES!!!!! I KNOW YOU REPEATED THAT LINE TO ME AND I TOTALLY FLIPPED!

Then the email degenerates into me craving Butterfingers. But, you get the idea. It was a MOMENTOUS moment in my life.

My green-haired friend and my crazy friend (not crazy in the head, just crazy fun-wise) both were in love with the Cure, especially at this time in history. They tried to convert me. I was busy listening to Kid Rock’s Devil Without A Cause album daily. While I do own the song “From the Edge of the Deep Green Sea” by the Cure now, the only Cure song I actually like is “A Night Like This”, performed by Professional Murder Music (see YouTube video below for a taste).

http://www.youtube.com/playlist?list=PL-xTfUi_q3IWvsnVDYakoqHVgqQXYd-P2
* Song lyrics from “From the Edge of the Deep Green Sea” by The Cure (Bamonte, Gallup, Smith, Thompson, Williams).

This was a quotation mystery that it only took me eight years to solve.  For a quote that I am still trying to find the source of, come back to read Thursday’s blog.