This week I learned that my husband can build a swing set (well, there is only one swing for now, so I guess it isn’t a set so much as a swing frame) with no plans or measurements except for what was in his head. I think it came out awesome. My son loves it. Our backyard now looks very kid friendly. And if the weather ever cools down, my son can use it some more.

I am very proud of my husband and his manly building skills. I think he may have even surprised himself.

I also learned the best gift a girl can give a friend is homemade deodorant. I have had problems with deodorant giving me a rash for years. For the last few years, I have used Dove Invisible Solid for Sensitive Skin. It was kinder to my skin than most, but still contains the ingredient that gives me a rash (Aluminum Zirconium Tetrachlorohydrex GLY), albiet in a lower percentage, so that it never quite kept me dry either. Plus, I believe it is widely known that that ingredient probably helps people develop cancer. And I used to have to put Hydrocortizone cream in my pits to help with the rash. That probably doesn’t help the situation either.

Then Lazy Hippie Mama made me some homemade deodorant (see this post for recipe). It rocks! She made it from coconut oil, baking soda, and cornstarch. It doesn’t seem to give me a rash. It works. I don’t feel guilty and worry that I am poisoning my body. It did burn a little after shaving, but so does the Dove. It held up alright on the 102 degree day we had this week, although I got scared and reapplied halfway through. And the Dove didn’t do well at high temperatures either. But I would say, all in all, that is a pretty good review for something you can make out of ingredients from your kitchen (and wherever the hell you buy coconut oil at).

If you love your friends, give them the gift of homemade deodorant.

I learned that “Being Human” (the U.S. version) is a really good show. It probably helped that my husband and I roared through the first season in like 48hrs due to my son having a cold and not wanting to sleep much. Unfortunately, we watched “Being Human” on streaming Netflix, and they do not yet have the second season available for viewing:( If you don’t know, it is the show about a vampire, a werewolf, and a ghost who live together in a Boston house. It sounds like the beginning of a very lame joke, but the show was well-written, had action, humor, sex, and left me caring for the not-quite-human cast. 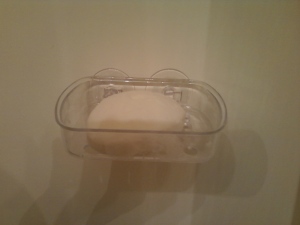 I also learned this week that they sell suction-cup soap dishes. How long have these been around! Why didn’t anyone tell me! We moved into our house in 2004, which has a tub surround with no soap dishes built-in. For years we have been balancing the soap dish on the edge of the tub. I couldn’t buy a new soap dish, because new ones would not balance in the corner as well. And the new suction cup one we can put up high, so we don’t have to always bend over. And it has holes for self-draining! Which I love, because I use Dove bath soap, and it melts like nobody’s business when left sitting in water. Which happened frequently before.