I Love Cheap Jewelry, But It Doesn’t Love Me

You would be correct to assume that a great number of these items are non-compliant.

And life was all fine and dandy until I was in 10th grade. Then I got oozy ears.

Earrings I had worn on many occasions, for extended periods of time, were suddenly causing my ears to ooze yellow puss. It was gross. My mom took me to the doctor. I always remember that the doctor had a giant red bulbous nose (whose daughter incidentally has been my anesthesiologist on two occasions since then). I got the dreaded diagnosis: I had a nickel allergy.

Now, if you haven’t experienced this yourself or know anyone who has, you are probably just thinking of the U.S. currency coin in the amount of 5 cents, commonly known as a nickel. But nickel is in a surprising amount of items. Not surprising, if you realize that it is a cheap metal to add to other metals as filler. And for those who are allergic, it is an itchy nightmare.

The scientific name for nickel allergy is allergic contact dermatitis. I am guessing the cream the doctor gave me that day was some sort of corticosteroid, because it cleared that particular episode right up. Of course, I had to change my earrings. And overnight 95% of my earring collection I could no longer wear for fear of reaction. You can’t tell, but in my first drivers’ license picture I had oozy ear. The puss would literally drip off my earlobe, so I sat there dabbing at it as I took my written test at the DMV.

For a while (maybe a year?), I had had odd incidents that infrequently occurred of my upper lip being swelled up when I woke up in the morning. I figured it must be some sort of allergy, but I didn’t know what. I tried to trace it to some food I had eaten the day before, but no pattern emerged. After I found out about my nickel allergy, I realized that is what was wrong with my lip as well. I had one necklace, a souvenir from my gramma from Garden of the Gods. Every time I wore it, I sucked on the charm. Which was apparently made of my enemy nickel. Other women have to put collagen in their lips for the full look. All I need to so is rub some cheap jewelery on mine. 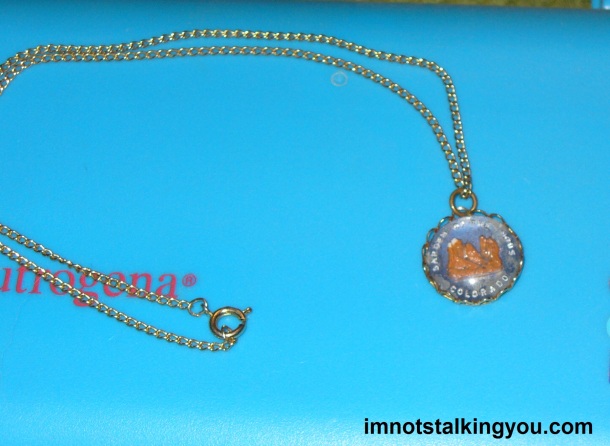 My Garden of the Gods Colorado necklace that triggered my first nickel allergy.

Then I noticed as I wore necklaces, the back and sides of my neck (where the chain touched my skin) would get irritated and itchy. I could no longer wear watches. Not because of the metal on the back of the face, but because of the metal in the buckle. One day I took a bike ride and I put my house keys in my sock as I usually would. By the time I got to my friends house, my ankle was already red and itchy and developing a rash.

Probably the worst time was when my glasses started to bother my face. I had metal frame glasses that sat on my nose. So, where they touched on either side of my nose, my face just turned to red itchy ooze. I learned I could put baby powder on it, and that would not only soak up the ooze, but also turn my bright red skin to a more normal pink. Imagine trying to study in college and all you want to do is claw your face off. I got to where if I was at home and wanted to watch TV, I would remove my glasses and just sit very close to screen. Someone suggested putting clear nail polish on the frames, maybe a layer between the metal and my face would stop it.

It did not stop the reaction and then where I had put the nail polish on the glasses it reacted and turned green. No wonder I never had any dates in college. I was quite the catch. Not.

When I went to get new glasses, I expressed this concern to the eye care professional helping me to pick out frames. Ones without nickel were so expensive that I let her talk me into ones with nickel, but she said the nose pads would keep them up off my face. Even though it looked as though there would be no direct contact, that pair irritated me as well. Now I go titanium all the way. It is worth whatever I have to pay for it.

You would be shocked at how tiny events in your day could lead to a rash. One afternoon I had like an hour between when I got home from college classes and when I needed to be at work. So, I pretty much took my winter coat off and fell over on the couch to sleep, using the coat as my pillow.

I go to work later, and someone asks me why I have a circle on the side of my head. I crawled up on the stainless steel sink to try to look at the side of my head in the mirror on the reusable fabric towel holder that hung above the sink. There it was. A perfect bright red circle with a pink hole in the center, roughly the size of a quarter. Like a rash donut (Yum?). I was befuddled, until I remembered the nap.

My coat had metal snaps with a plastic center.

When I started my first real adult job, I went from standing for 8hrs a day to sitting for about 9 1/2hrs. Ya, it sucked. The good thing was, it was a casual work environment, so I got to wear jeans every day.

And then a new issue surfaced.

The metal snaps or buttons that make up jeans? Yep, you guessed it. Made with nickel. I would get a rash on my stomach right never my belly button (I ❤ Mom Jeans, remember?) I suffered that way for a while, before I got my BRILLIANT idea to put electrical tape over the metal buttons. It is sturdy, you can continue to use the button with only minimal addition of bulk, and it survives multiple washings (but not dryings:).

My husband bought me real diamond earrings from an actual jewelry store and I can’t wear them because they contain nickel. Boo to you Kay Jewelers.

Then I got a patent leather bracelet I loved. How to cover the back of the snaps? Electrical tape. I got a very awesomely goth dog collar at Hot Topic. I was careful to get one that snapped instead of buckled. The electrical tape trick was slightly less effective on that, as there were other metal studs on the outside. But it helped. 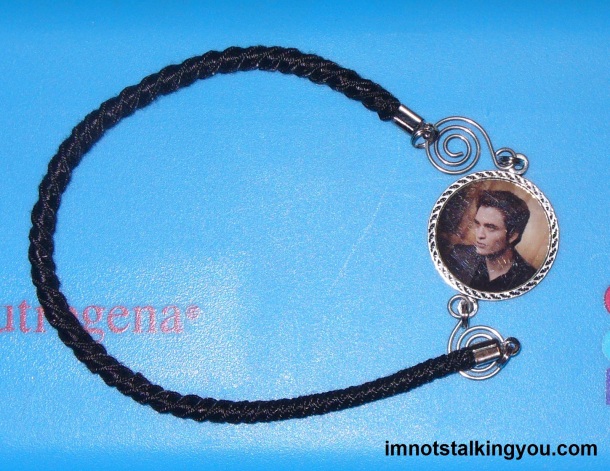 An Edward Cullen bookmark/bracelet purchased at a bookstore? Oh, that doesn’t give me any irritation at all. Seriously.  Go figure.

I was at a Good Charlotte concert on Halloween in Toledo, Ohio several years ago. I was trying to bounce with the kids around me who were like 10 years younger. My dog tag kept flying up and hitting me in the face. So I tucked it between my breasts (I was wearing a tank top). I even stopped to think,”This won’t give me a rash. It is my dad’s official WWII dog tag. They wouldn’t put nickel in that.” Oh, Uncle Sam, you did. I truly hope that is no longer the case, for the sake of all the poor soldiers with sensitive skin.

As bad as that rash was, the worst was a concert at an outdoor theater where it rained on my green-haired friend and I. If I was with anyone else, I probably would have sought out some rain-free shelter. But she wanted to walk around, so we did. In the pouring rain. And I had change in my front jeans pocket. I learned that night that, when that white lining of my pocket gets wet, I can get a nickel rash right through the pocket onto my thigh:( (Have I mentioned that quarters and dimes contain nickel as well?) *sigh*

So, that is my story. For anyone who has suddenly found out that they are allergic to nickel, here are a few tips:

1. Avoid nickel at all costs.

2. When you can’t avoid it, electrical tape makes a great barrier. It comes in a variety of colors.  Clear nail polish does not.

3. If you have an outbreak of rash, you can try to manage it with over the counter hydrocortizone cream and antihistamine.

4. Wikipedia says you can try cleaning the area directly after it comes in contact with nickel with soap and water and lemon juice or vinegar. [I have not tried this. I would love to know if it actually helps.]

5. Avon claims that all of their jewelry is nickel-free. In my limited experience, I have found this to be the case. (And sometimes they have Hello Kitty jewelry:)

6. Stop looking at the jewelery tables at craft shows (usually about 50% of the total booths) because you will never be able to wear that stuff again.

7. Transfer charms from chains that contain nickel to nickel-free chains or black rope.

8. If you wear glasses, buy titanium frames. Titanium is your best friend.