RSS Feed
← Excerpt: Chapter 1 of When You Least Expect It + Goodreads Giveaway
My Perfect Burger →

This week I learned that the movie One Small Hitch, is a really, really good movie. I stumbled upon it in a romantic comedy search on Netflix. It is a 2013 movie starring Shane McRae and Aubrey Dollar as two childhood friends pretending to be engaged for the sake of Josh’s (McRae) dying father. Awkward situations ensue.

I will admit that it did start a little slow, but the leads are both adorable and it only gets cuter when they move into an apartment together. One Small Hitch is like While You Were Sleeping, except no one has to be pushed onto the railroad tracks and end up in a coma. A few people get punched in the face though.

This week I also realized that I have the best CD player in the world. 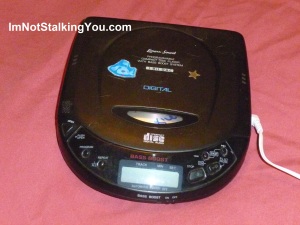 Yes, some of us without an iPhone or mp3 player with a screen still rely on such devices to make collections (mix tapes), “playlists” if you will, of songs that suit our fancy on any particular day.

I have a big CD player in my kitchen, but I wanted to listen to a CD while laying in bed. So, I headed upstairs to the electronics graveyard to find a small CD player. I knew we had at least one. Actually, I found two. One was a jogproof one that I had purchased one year for my birthday. It wasn’t jogproof, and I am not a jogger. So, ya.

The other is the CD player I quickly recognized from my old job. For the 12 years I worked for Borders, I used this CD player nearly every day. You can see that I doodled on it, and marked it with stickers so that if someone stole it, I would know that it was mine.

I cannot believe that it still works! I do believe that it used to have an AC adapter, but I can’t presently find it. I used to put a CD on pause, then head off to a 3 hour meeting, leaving it spinning on my desk the whole time. Last night I popped in batteries of questionable age, and it still worked like a dream.

And so many functions! I can program what order I want to play the tracks from on a CD, which comes in handy for albums such as Pieces of You by Jewel, that contain some very good, and some not very good songs. It has repeat one or all. It has bass boost. It shows track number and time at the same time!

For being around 15 years old, it has held up remarkably well. The volume dial causes some interference in the headphones when adjusted. But I used to have headphones with a volume control in the cord, so that was never a problem.

I love that it is a little no-name brand. I love that at that time, they thought they still needed to spell out that it was “DIGITAL” technology.

Don’t get me started on my love of analog/cassette tapes.

Follow the romantic entanglements of The Riley Sisters in my books:
The Wind Could Blow a Bug ON SALE for only $.99 for a limited time & GIVEAWAY going on over at Goodreads (ends August 15, 2015)
When You Least Expect It AVAILABLE NOW!

Posted in Entertainment Worship & Review, What I Learned This Week and tagged CD, entertainment, Lenoxx Sound, movie, nostalgia, old, One Small Hitch, player, review, technology, While You Were Sleeping. Bookmark the permalink.
← Excerpt: Chapter 1 of When You Least Expect It + Goodreads Giveaway
My Perfect Burger →