I can’t believe I have been writing this blog for several months now, and have yet to tell you about my dogs. Dave, a Lab-Chow (and possibly Shepherd) mix and Parker, a German Shorthair Pointer.

I wanted a dog for 20 years. Since I was eight & my mom got rid of Ginger, the dog we had as I was growing up. My mom wouldn’t let me have a dog in the trailer. She said there wasn’t enough room. (It would have been crowded, but we could have done it!) I had a goldfish for a short time. Like, I think it lasted all of 3 months. Then I was in an apartment that did not allow dogs. Although my now-husband & I had a hamster & a hedgehog while we lived there.

Then, in 2004, we bought our own house! Ya! (It was happy-time then. We didn’t know that our house would be worth $20,000 less in just 7 years.) That meant we could have a dog! The plan was always that I would get a dog first, then my husband would get one. I think we agreed on that because he had had a dog more recently than I. So, I waited as long as I could to get a dog. I wanted to have the house cleaned & unpacked & organized.

So, 3 weeks after we moved into the house, we went to the Humane Society. Now, I had spotted a dog on the Internet I was in love with at the Monroe County Humane Society. It was an orange/tan shepherd-lab mix named Chloe. Or Zoey. I don’t remember. Anyway, my husband was too lazy to drive that far, so we went to the Lenawee Humane Society that was only five minutes from our house first. There I saw a very pathetic dog named “Sunny.” She was orange & a mutt. That fit all my criteria. All my pets had always been orange. And I really wanted a mutt. She just laid there on the concrete floor, looking so sad. She was the only dog that didn’t bark at me. She did come get a treat from me when I offered her one. She had been fixed just 2 days before. So, my husband & I took her into a room to play with her. She looked out the window a lot & peed on the floor. That was our first glimpse at her playful personality. Also, what should have been our first clue that she wasn’t really housebroken, even though she was a year and a half old.

We ended up taking “Sunny” home. Because she had just been fixed, she was still sore, and my husband had to lift her hind end up to get into the SUV. (We would have to continue to lift her into the back of the Aztek for the next year.) I turned around to look at her in the backseat of the car, before we even left the parking lot, and said,”Oh no. You are not a Sunny. You are a Dave.” About a week later, we discovered that Dave did indeed have a bark. Or rather, a howl. My husband & I were being goofy, and she howled at us. I looked at my husband & said,”Is that good or bad?” He said,” I think she is happy.” My husband was very happy because he had always wanted a dog that could howl.

We had a rough start with Dave. My sister-in-law told me that she had seen Dave with LHS in April. We didn’t adopt her til Friday, August 13th. I think with the combination of being at the Humane Society so long & having surgery, she probably felt like no one loved her & was very depressed. She is a dominant dog. Once she realized she had a home, she proceeded to try to run the house. We took her to Dog Obedience classes, and now she is a dream dog (After years of work, of course). We went to Kate Cook, who I highly recommend, but I don’t think she trains dogs anymore:( I still have to hold her leash ultra-tight if we pass another dog on a walk. Dave is dominant & wants to go hump them. And she can’t be in the backyard unsupervised, because she has been known to climb over our 4ft chain link fence to get at another dog.

Later I found the picture of the Zoey dog in Monroe I wanted to adopt. She looks VERY similar to Dave. My Dave is my dream puppy. I wouldn’t want to give her up for anything.

To find out why a girl dog got named Dave, you will just have to come back for my post next week:) 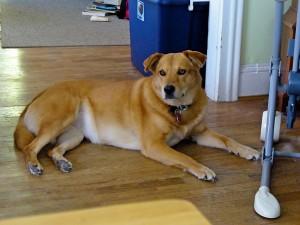