This week I learned that working retail Christmas Eve is tiring in ways I wouldn’t have expected. 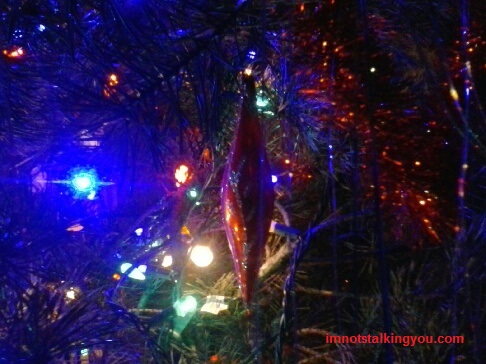 I expected it to be hectic, with lots of customers.  I had been to the mall in Toledo once on Christmas Eve many years ago.  My memory is probably tainted because I was young and short, but I just remember a sea of people, shoulder to shoulder.  I imagined that at my own mall.  (The one I work at.  I don’t own my own mall.  I don’t think I would even want to.)  At 12:45PM on Christmas Eve, that had not come to fruition, and I don’t know if it did after that.

I had a co-worker with me and we had a line, but it was not overwhelming.  The part that got to me was explaining the details of the product we were selling, over and over again to each person.  Sometimes we had to explain it to the same person several times.  I didn’t just work Christmas Eve, I had worked the three days prior as well.  My tongue was twisting on my spiel.  And answering the phone reciting Santa’s hours.  I had them all memorized, even his break times to “feed the reindeer.”  For someone who was used to working 18hrs in a week, I ended up working 32 hours in 4 days.  I was wrecked.

I had thought I would be tired from the rush of so many people and transactions.  I actually was wrecked mentally.  My boss was out of town on vacation, so I took it upon myself to try to keep our space well stocked and in order.  Everyone was supposed to, I think.  But I took the initiative, and no one seemed to complain about it.

By the time my shift was done, I just wanted to throw the money from my drawer up in the air and run for the door. Instead, I had to complete paperwork, and answer a question for a co-worker who was stuck with a customer situation.  She is a sweetie.  But all my customer service reservoir was drained, and it was all I could do to make myself talk her through how to fix the transaction on the register.  It is very true to say that my job that I usually enjoy immensely whooped any love for it out of me for the week.

Here is to hoping I recover from Christmas before New Year’s.  And my birthday.  And my husband’s birthday.

The holidays just keep on a comin’…