Exercising a Different Kind of Creativity

I was afraid it would just be like one table giving away Operation Lifesaver stickers and keychains with, like, homeless guys peeing in the corner or something. But we got to ride on a railroad work car, tour an Amtrak train, see several locomotives up close, and saw two and a half rooms of train-related booths. Some were of places we have been, like the Steam Railroading Institute in Owosso, and others we have on our to-do list, like the Fostoria Iron Triangle. We also found some destinations we might add to our list, such as the Mad River & NKP Railroad Museum in Bellevue, Ohio. 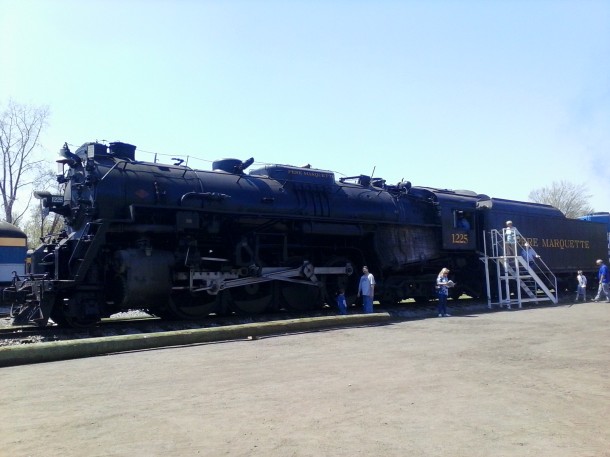 The Pere Marquette 1225 A.K.A. The Polar Express from last year’s visit to The Steam Railroading Institute

After several hours, we agreed we had all had fun, but we were tired and hungry. We headed to Chick-fil-A for a rest and some lunch. We would eat, I would make my husband stop at Five Below for a hat I believed I had to have, and then we would head home. I would probably be lazy the rest of the day, if possible. 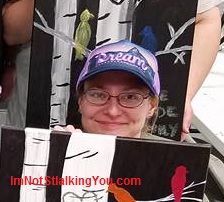 Me in my new cool hat. Sorry I didn’t take a better pic.

Our intentions were almost thwarted when a carnival was being held nearby and parking was heinous. But we persevered, and upon entering the restaurant, it was busy but not over-crowded. My husband spotted his sister there with her daughter. Soon my sister-in-law’s sister-in-law showed up to too. We ditched the boys and through a crazy, unpredictable set of circumstances, I ended up awake past my bedtime an hour and a half from home on a girl’s night out with a completed painting inspired by my family. I had felt like the universe had given me an opportunity and I had no choice but to take it.

I used to list art as my favorite subject in school. Now I am sort of a non-practicing artist, like how someone could be a non-practicing Catholic. Those skills don’t disappear, they just lay dormant and get a lil’ rusty. But it felt good to use the colors and shapes part of my brain rather than the letters and grammar part I have been running marathons with for the past few years. I kept telling my sister-in-law that it felt like we were in art class back in school. Because, well, we indeed did go to school together and here is the proof, a picture taken in art class almost 22 years ago. 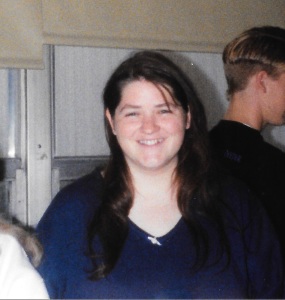 So, here is my finished painting. I am kinda proud of it. Sure, it isn’t up to professional standards, but it is nice enough to hang on my wall. I stole the saying from Hallmark. And I’m not sure if you can tell, but the hearts have glitter on them. Because, well, when you carve into this tree, there is glitter inside. It is a magic tree. 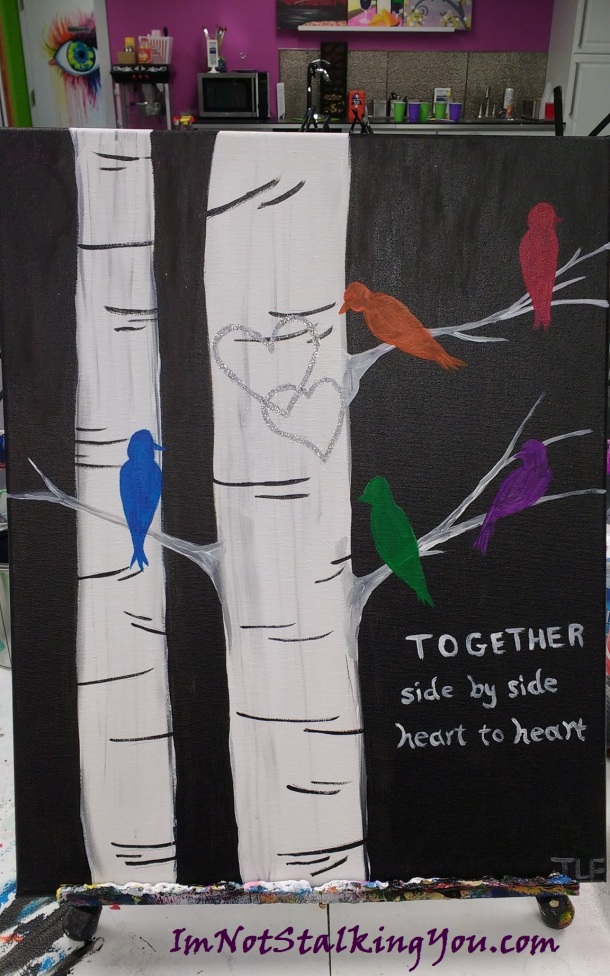 My Masterpiece. I really love it.

Yes, even my painting has to have a story attached. But then, a picture is worth a thousand words, right? Sorry to disappoint, but this post is only 500…

Comments Off on Exercising a Different Kind of Creativity