“We are not going to Mackinaw City.”

My mom and I took a vacation “Up North” in Michigan in June of 1990. I had completed 8th grade, and was due to change buildings to start scary high school in the fall. My 80’s perm that I had finally gotten caused my hair to become dry and frizzy, and I didn’t have the good sense yet to cut it of. My hair would never be as long again until my future wedding. I still toted my New Kids on The Block book with me, and of course my stuffed animal Barfeys.

Turning in for the night with the essentials

We were only going for three days. My mom decided we would travel up the west side of the state. This was a change from trips we had taken Up North in the past. Usually we were gone for four days, to allow for more sight-seeing, and we usually traveled up the east side or the middle of the state.

“We are not going to Mackinaw City.”

This was my mom’s statement, over and over again, as we planned out the trip. Mackinaw City, and with it the Mackinaw Bridge, are two of my mom’s favorite things in the world. We had been there before. But I think she made the statement for two reasons.

Wait. That is three reasons. But they are all related to each other.

We headed off at the end of June. My mom must have thought I was old enough to pack for myself, because I went without a jacket. It is summer! It is June! Who needs a jacket!

That was the gloomiest, rainiest, coldest end of June, until 2015. Since then, I have learned that it is always colder the further north you go, and near the water. Either way, it was still colder than it should have been. My mom told me to layer my T-shirts, so I did. It did not really help to keep me any warmer.

Our first major stop was Holland, Michigan. It was really awesome to see an actual Dutch windmill. There were dancers who wore wooden shoes. They were impressive. Even with wearing layers and layers of socks, I still figured that must be the worst summer job in town.

We traveled through Muskegon that day, and spent the night in Manistee. I kept thinking how much it sounded like “manatee.” We went to sleep and dreamed of warm days and sunny skies. But the dawn brought only more clouds and rain.

In the morning, my mother reminded me, “We are not going to Mackinaw City. We need to start heading back down for home tonight, so we will not have a long drive tomorrow.”

We traveled through Frankfort and spotted a lighthouse across the water. Lighthouses are my favorite. If I recall correctly, my mom found a condo parking lot she drove through to get a better look at it. The Frankfort light may have been the first one I ever saw with a breakwater attached to it. The way the rough waters splashed up against it was impressive. I could have captured it better with a digital camera, but they did not exist yet.

We stopped at Sleeping Bear Dunes, another of my favorite places. Not so much when it is blowing and cold and rainy though. The first time we had ever been there, I was like eight years old. My mom wasn’t spry enough to climb the dunes with me, and I was too young to climb them by myself. Now, I was old enough to go up myself, but the weather was just too crappy. We bought me a souvenir T-shirt in the gift shop, to add to my layers of warmth. (I was wearing all the shirts I had brought for the entire vacation every day.) It was neon pink and three sizes too big, because I was not done with 80’s fashions yet. 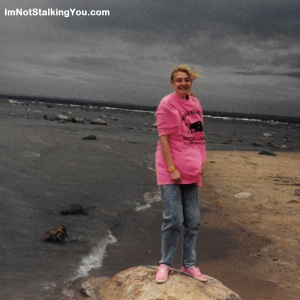 The wind is blowing my shirt, but it looks like something else…

If you think this is just a post about me whining about a gloomy trip, please stick with me. I am almost to the part where the cloud bank lifts and the angels sing. Actually, it was a band playing, but you get the idea…

We went to Traverse City. We drove out on Old Mission Point and found another lighthouse. We couldn’t go inside or climb this one either, but at least we could take pictures out front. 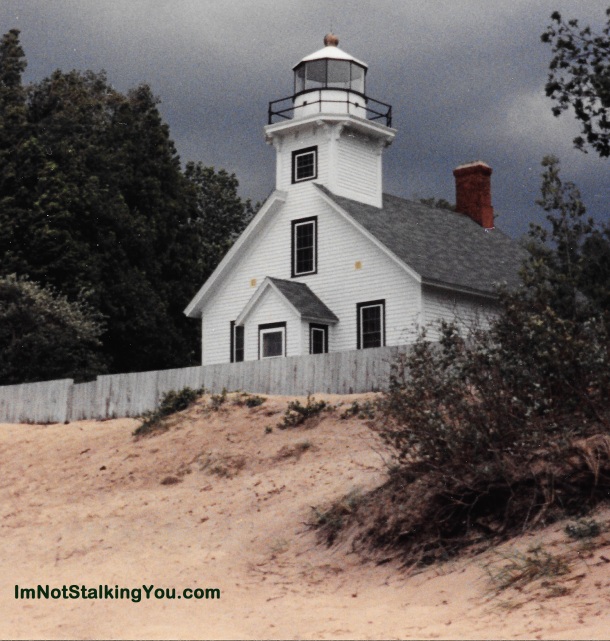 Then a strange thing happened.

She kept driving. I kept quiet. Sure, I was the navigator with the map, but she had to know we were headed for Mackinaw City, right? After all, there were road signs that indicated we were nearing it. Billboards advertising the various ferry companies, Arnold, Sheplers, and Star Line, became more and more prominent.

Another funny thing happened. The clouds began to clear.

But she was the mother, the adult, and she had said, “We are not going to Mackinaw City.”

Had she lost her mind? Taken leave of her senses?

Either way, I was keeping my mouth shut, because I really really DID want to go to Mackinaw City. I figured if I didn’t say anything, we would just end up there and it would be too late.

And that is just what happened. We rolled into Mackinaw City. And while I wouldn’t say the sun came out, the rain stopped.

The weather improved enough that the kite store was flying a long string of colorful kites up into the sky, all tied to one another. It was like a fabric rainbow after the rain. The scent of fresh fudge hung heavy in the air. Next to the Straits of Mackinac in the park at the end of the street, a huge band started to set up. When they began to play, the music drifted down the street, where cars were parked along the center boulevard as they probably had since the 1950’s, and souvenir shops lined up next to each other. Since the 4th of July was only a few weeks away, they had many patriotic songs mixed into their selections. I guess it made sense that they were playing in the town square, since it was a Saturday evening. But I was on vacation, and had lost all track of time.

Actual program from that night’s performance

I just think back on that night so fondly. It is one of the moments in my life that I will cherish forever. That may be one of the most relaxed and happy times of my life, right then. My mom and I walked the shops until the lights shined brightly inside and the sun fell below the horizon, in the shadow of the giant bridge, connecting the the two peninsulas like a neck connects a head to a body.

In the morning, the sun shone brightly in the sky (of course!). We made one last visit to my mom’s favorite park by the bridge, then started off on our long trip home.

Still, I think she may have been in a vacation daze. If I had said anything, who knows, it may have snapped her out of it. Then we never would have gone to Mackinaw City. I wish I was there right now. With a jacket, just in case…

Over the Labor Day weekend, my family and I took a vacation to Gettysburg. As early in our relationship as planning for our honeymoon, my husband had expressed interest in visiting Gettysburg. So, I figured maybe after 11 years of marriage I should let him go.

The first thing to know is that Gettysburg is in Pennsylvania. That is what YOU have now learned this week.

I saw many billboards for casino’s owned by Penn National Gaming, which is the company that also owns the Hollywood Casino, where I once had a job interview, and where my asbestos friend’s husband works. It dawned on me that maybe the “Penn” in the name means the company started in Pennsylvania. This made me feel smart.

Then I realized the answer to my own question. Pennsylvania is “The Keystone State”. The shape must be a keystone.

And the only reason I even know what the hell a keystone is, is from a Thomas cartoon.

A scene from Thomas and Friends Blue Mountain Mystery, with the keystone missing

Then my husband and I wondered WHY it is called that. We had several theories. His was correct. He said because of Pennsylvania’s place in the creation of our country. Also, economically and geographically as well.

Our trip didn’t always go smoothly, but it was relaxing and memorable, including my son M’s first time camping. He did great…at that, anyway.

Here are a few of my artsy-fartsy pix to share with you today.

The “kids” in the backseat

Monument for Jennie Wade. Super interesting story, look it up. 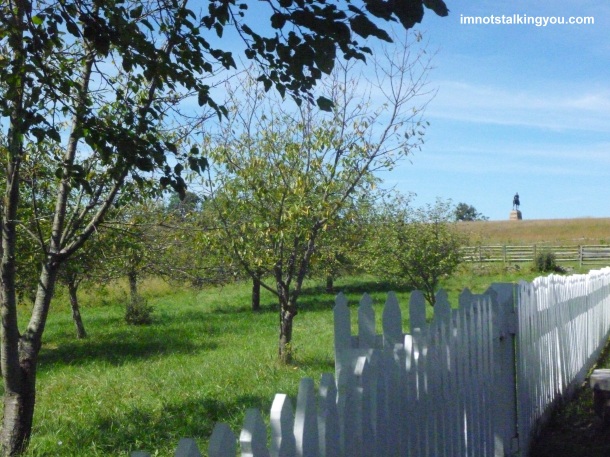 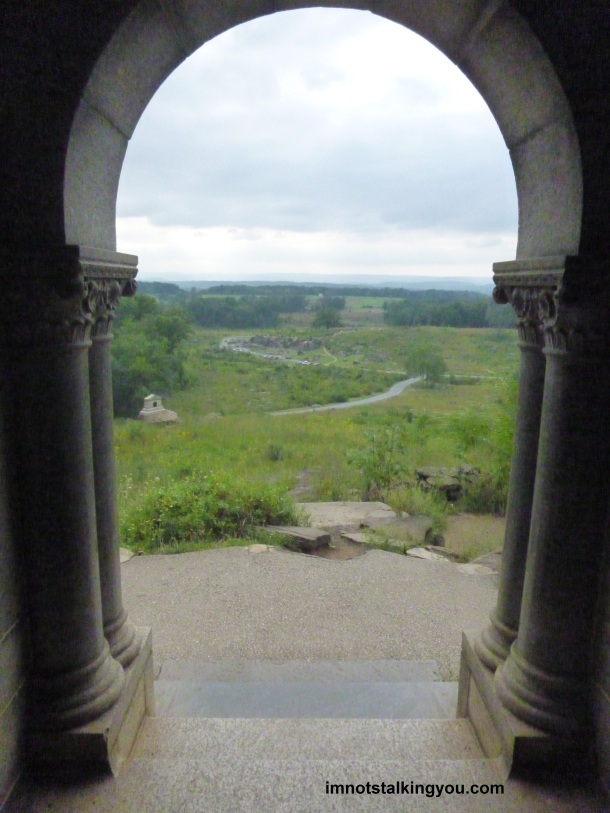 The view from Little Round Top

I’ve never done one of these before, but I loved how it turned out…