It is something lots of people in the U.S. take for granted.

When I was a child, we didn’t have air conditioning in our house or our assorted cars. And I never thought anything about it. The lack of it was not hardship in my life.

Then when I started 2nd grade, my mom and I moved into a trailer (a.k.a. mobile home) in the trailer court. Crazy thing here is that it had an air conditioner–in my bedroom, no less–(and a washer and dryer) when we moved in, but she sold them, with the excuse that they would be too expensive to run. Then she spend the next 16 years that we lived there complaining about how the laundromat was so much more expensive than having a washer and dryer at home. Go figure. A lot of what she does doesn’t make sense to me. But if I ask her, she will double-talk me until it does. Until I talk to another rational human being, who points out the holes in her logic, or lack thereof. 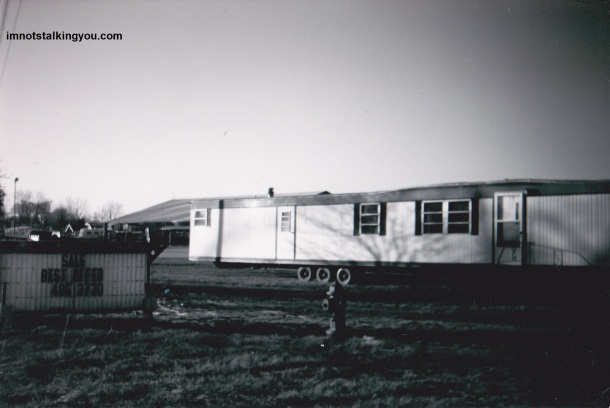 My old home was just pulled out to the curb, to be sold for best offer, like some used car or piece of trash.

Anyways, if you are not aware, trailers heat up faster and retain more heat than your typical wood-frame house. Actually, you can liken them a lot to the greenhouse affect that happens to your car on a hot day. You know how they say “no matter how far open you leave your windows on a hot day, it will always get too hot to leave your dog in there?” Works the same way with a trailer. No matter how many windows you open or how far, it will always heat up in the midday summer sun to an unbearable level. (And we had the old, slanted crank windows that blocked any potential breeze. And eventually became too stripped to crank, no matter how careful you were each time, and had to be propped open with a chunk of wood.)

I was that dog.

While my mom scampered off to work in an air-conditioned office, I was at home for three months every summer, with nothing but an oscillating fan.

Most days I could ride my bike outside and make a little breeze for myself. With little tricks like aiming the fan to blow hot air out the kitchen window when running the oven, then turning it around to suck in the cool air at night, we managed. Barely.

Do you remember that Married with Children episode where the Bundys were so hot they went to live in the frozen food aisle at the grocery store?

The Bundys camping in the grocery store.

That may be based on a true story. I used to travel to the little local grocery store that was only a four minute walk from my house, just to loiter and absorb as much cold air as possible before my short, sweaty walk home again.

On 80 or 90 degree days, it was just so miserable. Where my current house may equalize with the external temperature, it never gets hotter than that. In that trailer, it was always at least five degrees hotter inside than the temperature outside. There was one summer where the high temp was 100 or greater for four days straight. All my mom and I could do was lay in front of the fans and sweat. Well, she was recovering from surgery, so she couldn’t do much else anyway.

And I realize I sound like I am whining, but I’m not. I actually don’t even like AC because it dries out my sinuses and makes it hard to breathe. And I know some people work construction or road crews and are subjected to high temps for hours. This post isn’t really meant for them.

I want to campaign for if you are going to live in a tin can, you need to provide air conditioning for your child. I used to ride my bike all through the trailer court (there must have been a couple hundred parked in there) and look at each and every home as I went. Some had central air, some only window units, but were all running. MY TRAILER WAS THE ONLY ONE WITHOUT AIR CONDITIONING!!!

After that, I lived in an apartment and now I have a house, in both I have had access to window AC units that I rarely use, because it just doesn’t get as miserably hot as the trailer did.

My mom bought a different trailer after I moved out, and guess what it had?

My favorite quote from the movie The Last Starfighter

I write about things that stood out in my childhood. Being HOT (and not in the leggy supermodel way) and bored and lonely all summer long is something I will never forget until the end of time. It indeed felt like I was in hell.

If I win the lottery, I think it would be awesome to start a fund that would help poor people living in trailers to get an air conditioner, and maybe supply a stipend to help offset the increased electrical usage annually. Maybe that is silly. Food and medicine and such are always looked at as more pressing necessities for the needy. But heat can be dangerous. That is why NOAA has heat advisories and there are community cooling centers on really hot days. It can be a danger as much as any forest fire or volcanic eruption.

Individuals who live in trailers have enough issues to deal with. There is the stigma of being trailer trash, white trash, or redneck. Then their is the fact that Mother Nature has it out for you in other ways as well.

Johnny freaks out over a tornado on WKRP in Cincinnati.

It is funny because it is true.

Follow the romantic entanglements of The Riley Sisters in my books:
The Wind Could Blow a Bug ON SALE for only $.99 for a limited time
When You Least Expect It AVAILABLE NOW!