This week I learned that Lena’s Italian Restaurant in Blissfield, Michigan still has the best pizza I have ever eaten.

I was told by my asbestos friend, whose opinion on pizza I highly respect, that Pizza Junction in Huntington, Indiana was the best pizza ever. (She is the one who introduced me to Lena’s, afterall*.) She knew of it because she had attended Huntington College back in the day.

She has mentioned several times that Pizza Junction was the best pizza ever. I really wanted to test that theory, but I knew I would never go all that way without her. And when she made the pilgrimage, it was always a family affair.

I looked up Pizza Junction on Facebook, only to discover that it is named that because it located in an old train depot that still has railroad tracks next to it that used to be part of the Wabash line. There were even videos of a classic steam engine roaring by at high speed. Now, if you have stopped by this page very much at all, you will realize that my family is a little crazy about trains. Last year I redid my son’s room to look like a train station. M flipped when he saw the Pizza Junction videos.

My asbestos friend’s husband was out of town. So I snuck into her car and put in a cassette tape with hidden subliminal messages for her to take me to Pizza Junction.

What, you don’t believe me? She totally has a cassette player in her car.

Actually, I just sent her a suggestive text or two about how lovely it would be to go. So when the opportunity presented itself to us the very next day to accompany my asbestos friend and her brood to Indiana, we took her up on it.

The road trip was awesome, even being squeezed six into a car. We saw two Norfolk Southern trains go by as we ate in the station, and they were flying. The bruschetta was excellent. The pizza was great, but not quite as good as Lena’s, in my humble opinion. We explored a place called the Sunken Gardens, photos from which you will see below.

Sidenote: Last weekend a memorial was erected in our local cemetery to honor the long-ignored Italian immigrant victims of the 1901 Wabash crash just north of Seneca in Lenawee County, MI. Then my family went about figuring out about where the crash might have occurred. That track is now run by  Norfolk Southern. 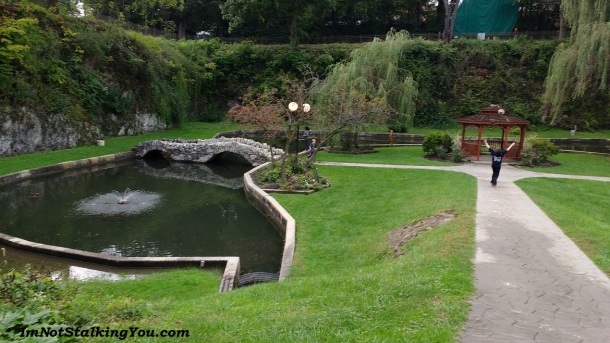 Some people were very happy to arrive at Sunken Gardens

I could have stayed here for a very long time…until it started to get cold.

FYI: The journey of 252 miles starts by back tracking to home.

If we could have traveled by train, we may have gotten to Pizza Junction quicker.

*Expressing “afterall” as one word is a conscious, stylistic decision made by the blogger.

This week I learned that Crystal Bowersox is really nice. Last weekend I happened to be in Blissfield, Michigan (my hometown) for Railroad Days, and Crystal, whose hometown is Toledo, Ohio (very close proximity), happened to be dining at the same restaurant as my family. It was Lena’s Italian Restaurant. (Their pizza rocks. If you are ever in the neighborhood, check them out!)

RAILROAD DAYS, you might ask? I know it sounds dorky, but if you are interested in trains, then it is not. I was raised by a mother that when she rode me around on the back of her bike, we would stop for the train and wave at the engineer. When we were riding around in the car out in the country, she would race to the tracks for the train.

NO, SHE WOULDN’T TRY TO CROSS THE TRACKS IN FRONT OF IT!

She would race up to the crossing, and then we would stop and watch the train go buy.

I do similar things for my 2 year old son, M, who is very interested in Thomas, and can identify most of the major parts of a steam engine.

Anyway, Miss Bowersox was eating with her family, including her son, who seemed very interested in my son. My family and her family chatted and she was nice enough to give me an autograph. I TOTALLY wanted to get a picture with her, especially since I had my brand new higher megapixel camera with me. But I was too chicken.  (Check out my new page of Celebrities I have met, called When Stars Align.)

It was totally awesome that she was there, because, well, no one famous EVER comes to Blissfield. I think the last time was when Little Texas stopped at the Blissfield McDonald’s in the mid 90’s.

I also learned this week that I am employable. I HAVE A JOB! It is only part-time, only pays half of what I used to make at my previous job, has no benefits, and is a further commute (by like 3 minutes). But, it is also only part-time, so maybe if my husband gets a full time job, I can still fit this job around his. And I don’t have to clean any bathrooms. And the button-down uniform shirt actually fits me better than my own button-down shirt I wear for interviews-go figure.

PARKER UPDATE: The Vet says he had good healing tissue, and she is no longer going to check his progress every week. We are putting prescription cream and aloe (alternating days) on his wound right now. After two times sewing up the wound (and it coming back apart both times), she is just going to let it grow back together on its own. Which means there is a big hole in his doggy armpit still, which I try not to look at. If we put a T-shirt on him, he can roam around the house (supervised) without his cone collar on.

Q.  What do you call a Pointer wearing a cone collar and a major injury?

A. Still a flight risk!