Note from the FunnyGurl2: This post begins a week-long series on important medical disorders you should be aware of. They could strike your family at any time. The only way to be prepared is to read all my posts this week and get informed.

It is a highly (un)scientific term for the red, bumpy, painful rash that can develop when skin is exposed to too much moisture and chaffing and not enough fresh air. It is highly prevalent in the hot summer months, although it can strike at any time.

ADR commonly occurs in areas of the body such as the groin area for a man and in the breast/bra area for a women.

Its causes and appearance are very similar to that of diaper rash found in babies. In that instance, it is from too much moisture being trapped between the skin and the diaper. Hence, ADR can be remedied in much the same way. Recommended medications include over the counter diaper creams and medicated cornstarch powder. 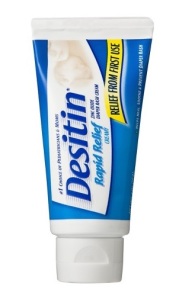 The key to prevention is to keep the area which exhibits a potential for ADR clean and dry. It is best if lots of fresh air can reach the area as often as possible. When this is not possible due to local indecency laws, you can use medicated cornstarch powder to attempt to absorb the excess moisture which occurs.

I hope you have found this informative and humorous. If not, you need to see your doctor right away about your ADR AND your butt.

It is defective. It has a crack in it.

Follow the romantic entanglements of The Riley Sisters in my books:
Be Careful What You Wish For – AVAILABLE NOW!
When You Least Expect It – CLICK HERE TO WIN!
The Wind Could Blow a Bug – WHERE IT ALL BEGAN!

Comments Off on ADR