I tend to obsess about things. Usually they last a few months, and then they pass. Four years ago I was obsessing about Barack Obama. Here was this handsome, intelligent man who wasn’t from a privileged background, up against (with all due respect for his being a veteran) an old fogey. Obama was sharp, well-spoken, and promised us all healthcare. I could listen to him read the phone book any day.  He was my candidate. 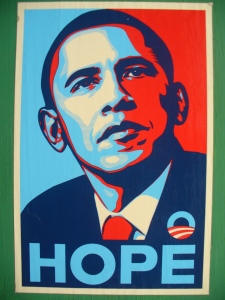 I had never really cared about politics much in the past. In 2004, I considered volunteering to help Kerry get elected. But I didn’t. I seriously did not believe George W. Bush had a shot of getting re-elected. I learned that lesson the hard way.

So, in 2008, as I was all hopped up on Obama goofballs, I volunteered to help his campaign. I must say, as my obsession waned closer to the election, it was harder and harder to pick up the phone and call people. Where my obsession had made me brave, the lack of it was filled once again with my anxiety. But I even manage to knock on doors on three volunteer shifts, something I never in a million years thought I could do.

I also worried about so openly declaring my opinion on something as big as the presidential election. I mean, what do I really know about who would be best to balance a budget or handle foreign policy. But I believed Obama was an intelligent man who believed the same way in most things that I did. I realized I didn’t have to know the right answers myself, I just had to support the candidate that I thought would make the right decision at the right time. 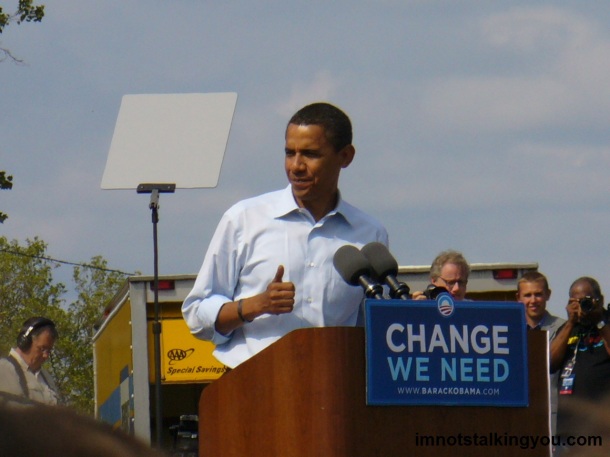 So, I put an Obama/Biden yard sign in my yard. (Even though I have to admit that I often misread it as Osama Bin Laden.) I put a magnet on my car, but it got lost at the car wash. When I was pretty sure Obama might win, I put an actual sticker on my car. After all, I didn’t want to drive around for the next four years with a loser on my car. Both the yard sign and the sticker made me worry that people would vandalize my property because I was expressing what I believed. This was a really big worry to me. Now I have a story for you.

My husband and I went to the campground where his mother camps to watch their fourth of July fireworks in 2008. It is in Michigan, the state where I live. We left right after the fireworks concluded. Most campsites were still filled with groups of people partying it up. As we left, my husband was driving, my sister-in-law’s husband was in the passenger seat, and I was in the back seat. I was the only one that heard. As we drove through the campground, toward the exit, I heard it. A word that I thought everyone knew better than to use these days. I will only type it once, so there is no confusion. But I would never use it myself under normal circumstances. As we drove out of the campground, someone yelled “N*gger-Lover” at my car.

I was instantly hurt. And it wasn’t really logical why. I am a lil’ trailer trash white girl, so no one had ever used the “N” word towards me. I figured they must have yelled it because of my Obama sticker on my back window. Now, it is not the first time I have been picked on/teased/bullied–whatever the kids are calling it these days. That was called “every day” when I was in middle school. And maybe that was part of the shock. Adults calling other adults by a bad name. How juvenile. I also was thinking “What Rednecks” in my head, although most days I would consider myself a redneck, in the Jeff Foxworthy kind of way. I was hurt, shocked, surprised. It was just a deep hurt that hadn’t affect me that way in years. And that is just what the name-caller wanted to do to me.

Then I tried to dissect the term in my head. I thought “Hell ya, I am”. He is a black man I am supporting and voting for for president. I do love him. Why should it bother me? My vote will cancel out your vote, mother-f*cker! (And the history books show that it did.)

Maybe a month or two later, I was at the local bowling alley. When I came out, someone had vandalized my Obama sticker on my car. It looked as though they had run a key right through it diagonally. That didn’t hurt me, it just pissed me off. (Notice both incidents happened at locations where beer is served.) After that I thought I would remove it fairly promptly, maybe as a way to erase their hateful act. But instead, four years later, the sticker is still on my car, badly faded, the jagged edges have rolled up and created a window canyon through Obama’s face. 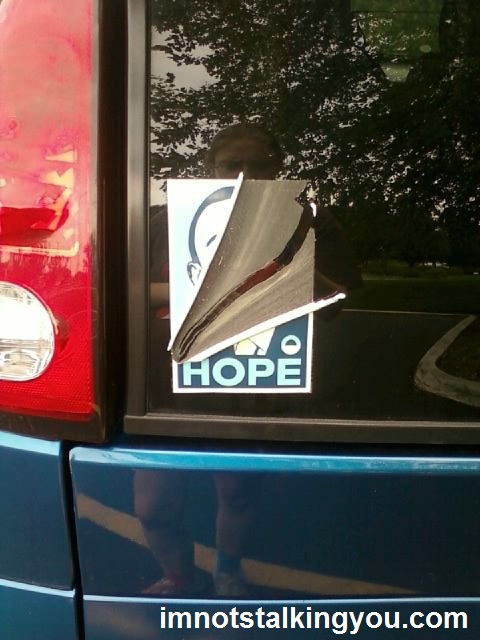 Everyone is entitled to their opinion. If you don’t support Obama, that is OK. It is alright to voice that. But please have some RESPECT.

Respect me and my opinion, my property, and President Obama.

Please don’t use racial slurs and destroy my stuff. I have held on to this incident for four years. The evil within people never ceases to surprise me.

Posted in A day in the life and tagged 2008, bullying, campaign, election, hate, Jeff Foxworthy, Obama, racial, slur, sticker, support, vandalism, volunteer. Bookmark the permalink.
← What I Learned This Week – 10/14/12
The Clinton Theater →